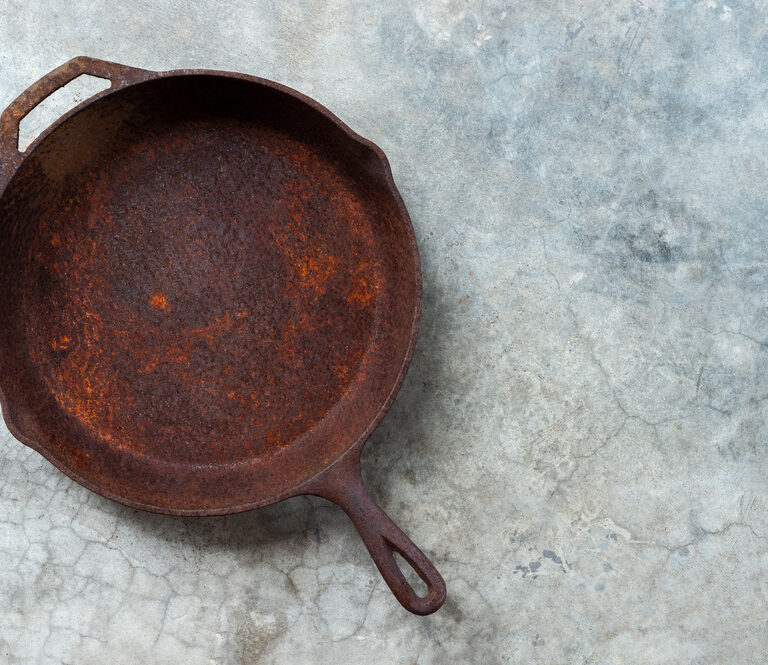 Cast iron is one of those materials that can last for generations. Even if you let it fall a little into disrepair, you can usually still rescue it from destruction with a little patience and elbow grease. By elbow grease, we mean vinegar and steel wool.

In this handy guide, we’ll be looking at the best ways to remove rust from cast iron cookware, as well as cast iron furniture and radiators. Read on the learn more about how to get your cast iron wares looking brand new again.

How to Remove Rust From Cast Iron Cookware 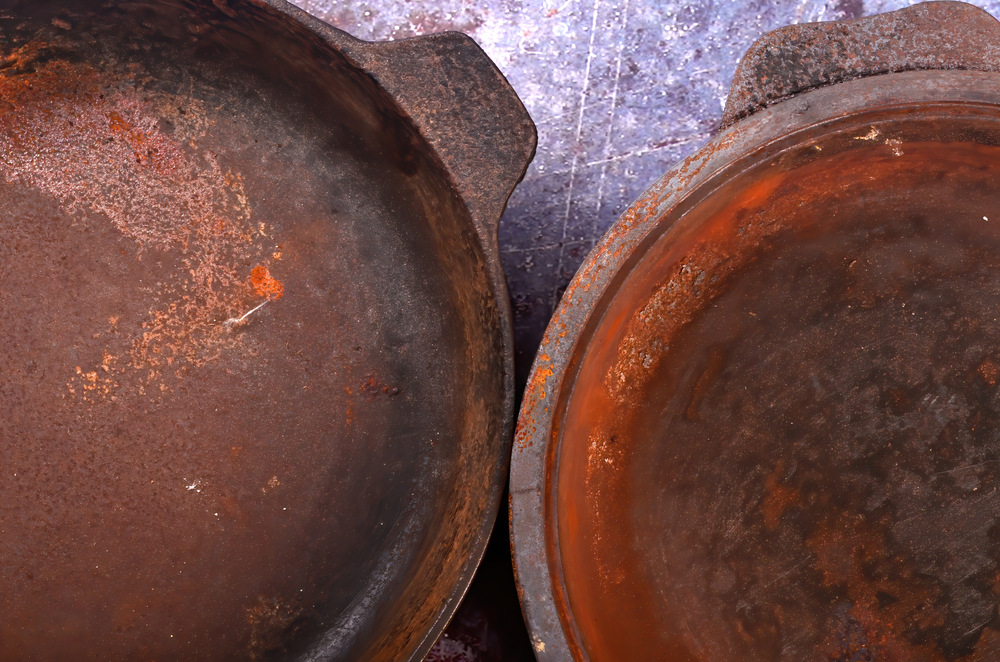 Getting rust off your cast iron pots and pans is usually pretty easy. You can soak them in various solutions to help loosen the rust and get rid of the seasoning that might be making it tough to wipe away.
If you only have a few spots of rust, skip step one, and go straight to step two. If more than roughly 75% of the surface is covered in rust, start with the overnight lye bath in step one:

For normal cleaning purposes, you’re supposed to avoid lye-based soaps on cast iron because they strip away the seasoning. However, when you’re dealing with rust which may be deeply embedded in that very seasoning, lye will be your best friend.

Once the lye bath is done, place your cast iron in a 50/50 solution of water and distilled white vinegar. This soak should only last a maximum of 30 minutes.

If you get through the remaining steps and there’s still rust to remove, you can do another 30-minute vinegar soak, but never leave it in vinegar for more than 30 minutes without a break. Otherwise, the vinegar will start to erode the cast iron itself.

As you rinse off the vinegar under warm water, use steel wool to scrub vigorously at the rust. This is where muscle power really comes into play. You need to apply serious pressure to get through the rust and down to the raw cast iron.

If you wear yourself out before getting all the rust off, that’s fine. You can put it back in a vinegar bath and give your arm a 30-minute break before you go at it again—or enlist the help of a friend to scour in shifts!

By the time your pan is 100% rust free, you will also have removed all or most of the seasoning. So, the final step in this process is to re-season your cast iron. To do that, follow these steps:

That’s it! Your cast iron is now rust-free, re-seasoned, and ready to cook.

For the first three to five dishes cooked in your restored cast iron, avoid acidic dishes like tomato sauces or anything with citrus. While the seasoning is still fresh, that acidity could dissolve through it and leave the cast iron underneath more vulnerable to rust.

Instead, aim for fatty, oily dishes. Fry up some bacon, sear a steak, or even just fry some eggs in butter. Cooking foods with plenty of fat will help reinforce and thicken the seasoning.

How to Prevent Rust on Cast Iron Cookware

Once you’ve gone through all the effort of scouring the rust off of your cast iron pans, save yourself that effort in the future by taking these steps to prevent rust:

When food gets really stuck on pans, it’s tempting to let the dishes soak a bit before washing so that the food can soften. Doing this with cast iron is a recipe for rust. The longer it’s wet, the higher the risk of rust.
Instead of soaking, you can apply a paste made of coarse salt and vegetable oil. Scrub that into the tough spots using your steel wool or scrub brush. Then, rinse and scrub as you normally would. If that doesn’t work, put that pan back on the stove and heat it up. When hot, you can try to scrape at the stuck bits with a spatula, or wait for them to burn down so much that they become char you can easily scrub off.

Don’t let your cast iron air dry. Air drying can lead to those wet spots turning into rust spots. Instead, towel dry your pans right away. Failing that, stick them in the oven or on the stove and heat them until they’re dry.

Use Towels if Stacking

The best way to store cast iron is to hang it so that any lingering moisture can evaporate into the open air. However, if you don’t have the space to hang them, stack them with a layer of paper towel or wash cloth in between each pan. The towel will help absorb any excess moisture and prevent dings and scratches in the surface of each pan.

While you can get away with putting the lid on a metal pot and tossing it in the fridge as a quick way to store leftovers, the same isn’t true with cast iron. Storing food in cast iron will have the same effect as leaving it to soak. The moisture in the food will cause the pan to rust.
We know it feels like a tedious extra step after you spent all that time cooking, but your pans will thank you later for taking the time to put the leftovers in Tupperware.

How to Remove Rust From Cast Iron Furniture or Radiators 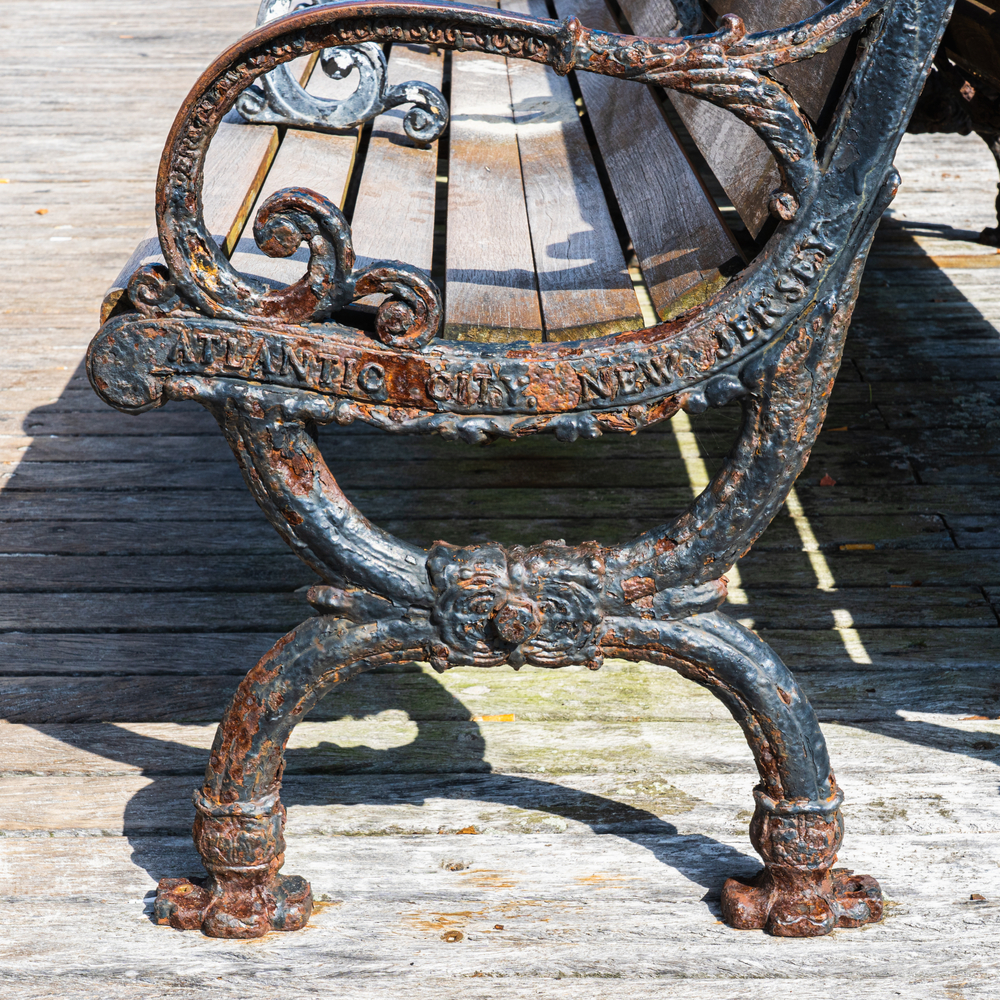 Larger cast iron objects like benches or radiators can be a little trickier than cookware. You can’t really toss it in a lye bath or put it in the sink to soak in vinegar. Instead, you’ll need a lot more muscle power and a couple more pieces of equipment. Here’s how to tackle those bigger jobs:

Soak your rag in white vinegar and use that to wipe away the lighter, smaller specks of rust. You don’t need to scrub vigorously here. The goal is just to wipe away the easier spots first so that when it’s time to sand, you’re only sanding the spots that really need it.

Once you’ve cleared away what you could with the vinegar-soaked rag, put on your mask, gloves, and glasses and start sanding. Sand in a wide circular motion and don’t stay in one spot too long.
If you concentrate the sanding pressure onto a single point, you’ll end up creating dips in the surface and leaving a grit pattern in the iron. So, sand around the rust spot as well to keep the whole surface smooth and even.
Every so often—like when your arm starts to get tired—grab the vinegar-soaked rag again and wipe down the area you were sanding. This way you can clear away the dust and see if bar iron is visible. Repeat this process until you’ve gotten all the rust spots out.

Once you’ve sanded down and vinegar-scrubbed all the rust away, wipe down all the surfaces once again with a clean, damp cloth. Be sure to get into all the nooks and crannies to get all the dust and vinegar off. Then, let it dry before moving on to step five.

This last step is optional, but strongly recommended, especially for outdoor furniture that will be exposed to the elements. You can get a paint color that matches the color of the cast iron itself, so you still get the same aesthetic.
Make sure the surface is dry and dust-free before you start painting. Apply a thin layer with a paintbrush. If it needs a thicker coat, allow this thin coat to dry completely and then apply a second coat. Don’t just add more paint on top of wet paint. It will bubble and peel as it dries which will create openings in the paint that leave the cast iron vulnerable to rust.

While removing rust from cast iron takes a lot of patience and some muscle power, it is possible. Plus, once you get rid of the rust, taking some basic preventative measures to avoid rust in the future will save you from ever having to do this again. So, it’s all worth it in the end!