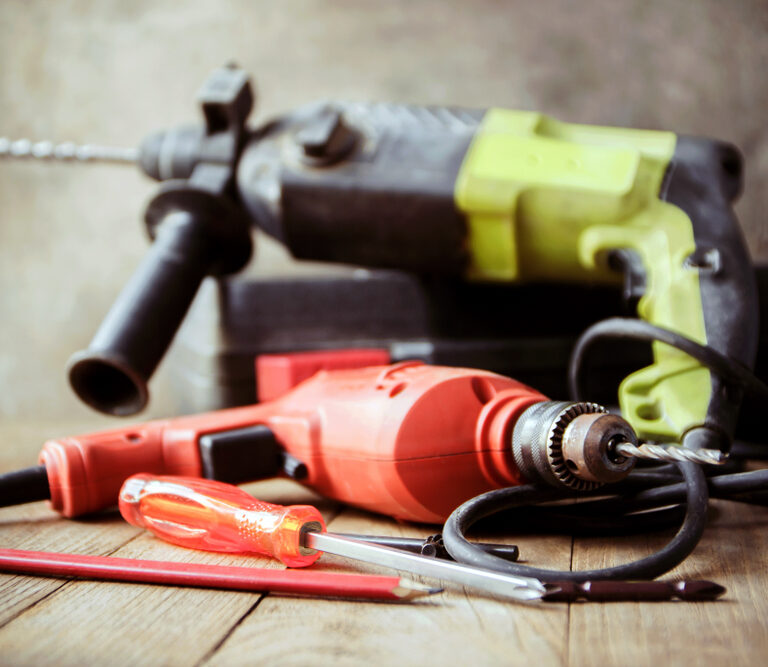 No matter what projects you tackle, a drill is an essential tool. A drill is often the first power tool that a person adds to their toolbox. Not only is the versatility of a good drill unparalleled, but it’s also absolutely necessary for many tasks, like boring holes or tightening and loosening fasteners.

When you are ready to add a drill to your tool kit, you will have a choice to make. Should you buy a normal drill, or should you spend a little more and get a hammer drill? In this article, we’ll discuss the differences and look at when to use one versus the other.

In a hurry and don’t want to read about the differences? Here are the basics at a glance. Just choose the job you need to complete.

If you are standing in the aisle trying to decide right now, just ask yourself if you ever think you would need to drill a hole into concrete. If your answer is yes, get a hammer drill. A battery-powered hammer drill with a ½” chuck will serve you well even if you never use the hammer function. It’s simply one of the most versatile tools you can own.

Want an even easier answer? Get the Dewalt 20v Max here.

Drills and hammer drills look the same from a distance. That’s because they share a lot of similar components. To compare the components, though, let’s make sure we are all on the same page by defining the different parts of a drill or driver.

A drill and a hammer drill are both power tools that use a chuck to hold a bit. They use an electric motor to spin the chuck and bit, and the motor can spin at different speeds and apply different amounts of torque. Both drills and hammer drills come in a variety of sizes and shapes so that you can pick the tool that fits the size of your projects.

On both tools, there is a limit to the size of the bit the chuck can receive. Some special drills and hammer drills use a “locking” or special chuck that can only accept certain kinds of bits. 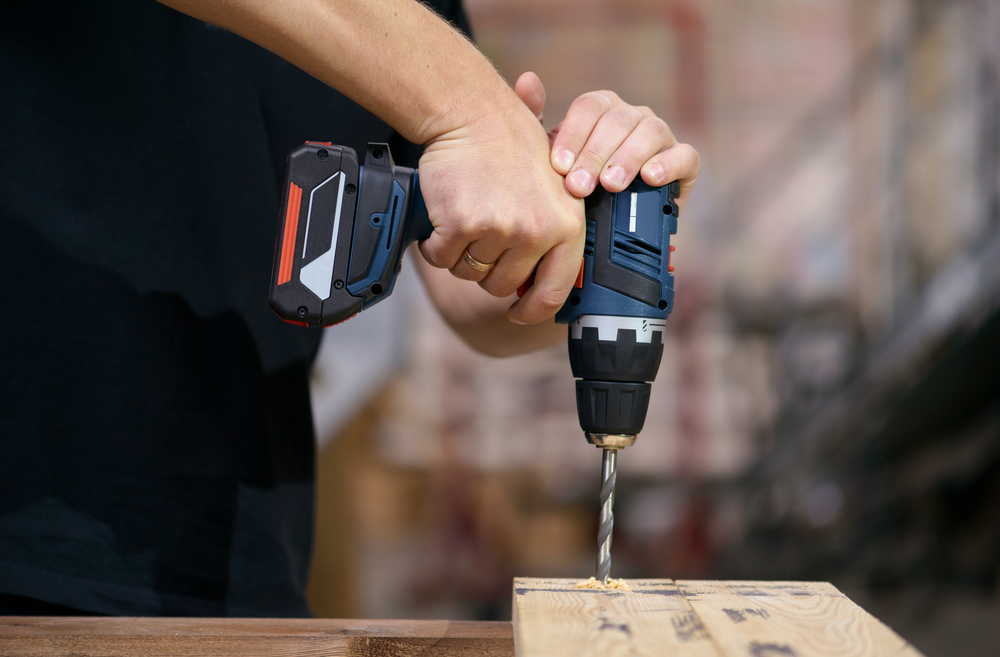 In the old days, drills had a crank that you had to turn by hand. Nowadays, we have it easy, and most drills are battery-powered. Some of the more powerful or very inexpensive ones still have a cord, but they still use an electric motor to do all the work for you.

There are three main advantages to owning a standard drill over a hammer drill.

Perhaps the biggest reason to avoid buying a hammer drill if you don’t need one is that they usually cost a lot more. A decent cordless drill costs $100. Getting a similar cordless hammer drill is usually double that.

Not only do they cost less upfront, but they cost less over time as well. Without the hammer action, they last longer, and the bits are less likely to break. The bits are also cheaper since they don’t have to be designed to hold up to the extra torque.

A modern drill is also a very competent screw-driver. You can put a Phillips bit into the drill, and you will have enough power to drive a 2” drywall screw into a 2×4 without any issue. Large hammer drills often have proprietary bits, so you likely won’t be able to get a standard bit for them. Even if you could, the hammer action would shear the head of a screw instead of driving it in.

It extends beyond driving bolts or screws, though. There are a ton of bits that can be chucked into a drill for all sorts of jobs. There are wire brushes for cleaning metal, polishing pads for waxing your car, and countersink bits for making your anchors flush. Most of these specialized bits will be destroyed if they are used with a hammer drill.

Modern drills are very precise. Most have dials so you can set a specific amount of torque, and many have multiple speeds so you can slow them down when doing delicate work. A good quality drill can even be used to do very sensitive things like remove small screws from electronics or drill precision holes into soft materials.

A hammer drill, by contrast, is much less delicate. The force of the hammer blow that gives the drill its extra oomph is the same no matter what, so even if you are just trying to make dollhouse furniture, you get full power. 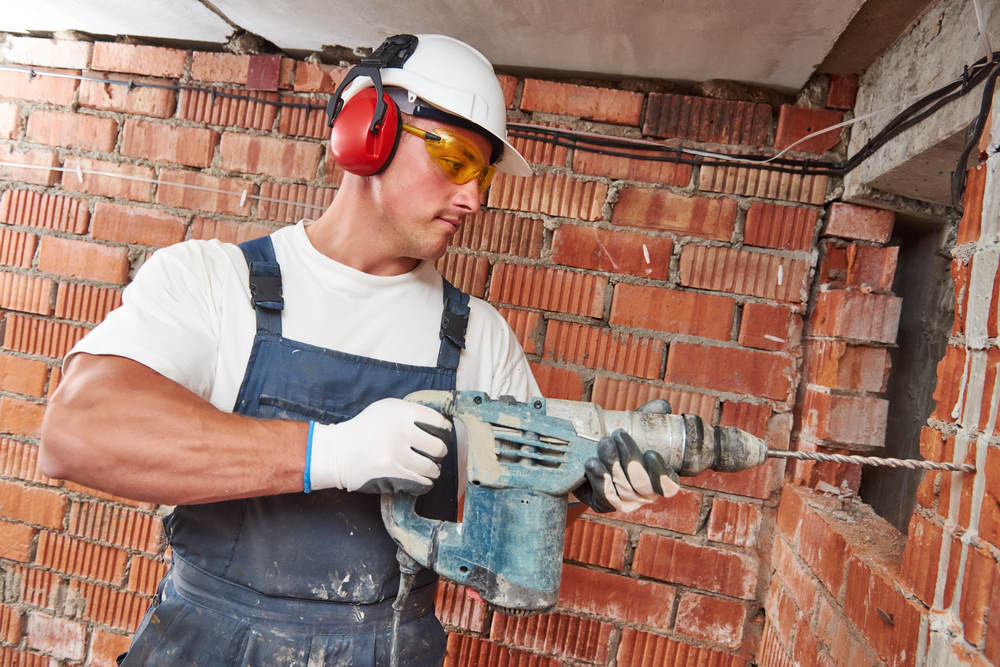 Hammer drills are drills that have a mechanism inside them that adds extra force to the bit. There are a few different styles of hammer drill, but the basic principle is that the bit gets moved down with force in addition to rotating.

Picture yourself tapping the back of a drill with a hammer as you try to drill a hole. That’s basically what’s happening inside the hammer drill. There are a few big advantages to that.
Greater Range of Materials
When the bit is forced down into the material in addition to spinning, it doesn’t need to cut into the material like a traditional bit does. Instead, it can act more like a chisel, and the flutes on the bit are simply there to carry the broken bits away. Picture a sculpture hammering a chisel into marble.

A standard drill has a very difficult time with very hard materials because a standard drill bit only works if it can cut into the material. A hammer drill overcomes that problem with brute force, and you’ll have no issue drilling into stone, concrete, or asphalt.

Larger hammer drills often have a selector that allows them to operate without the motor spinning the chuck. That turns them into mini-jackhammers and makes them very versatile if you work with blocks or similar materials.

Some hammer drills even make for great landscaping tools. A “Demo Hammer” is a very large hammer drill that isn’t quite large enough to be a jackhammer, and they can often use large spades that make breaking up dirt and clay easy.

The final thing we need to talk about is size. As you scale up, the differences between the two tools become much more pronounced. A standard 18v drill and an 18v hammer drill are nearly identical. They’ll both use keyless chucks, they both spin about the same speed, and they probably both have torque settings to avoid stripping screws. In fact, if you turn off the hammer function on the hammer drill, it will even feel identical.

As the drills get bigger, though, they get more specialized. A large drill for punching holes in metal will spin slowly and create a ton of torque. Many of these metal drills are self-lubricating and require very special bits. A large hammer drill will also require its own special bits for concrete or similar materials. These large hammer drills cannot function like normal drills anymore.

The best way to decide whether or not you need one of these special tools is to imagine the largest hole you’ll need to create. Let’s say it’s a ¾” hole in a Concrete Masonry Unit (CMU) wall. Then go find the bit that can do it and buy the drill that that bit fits into. You can always get smaller bits, but you can’t force a small drill to power through a giant project.

Choosing the right tool for the job is an art all by itself. We hope this guide helps you make a great decision about these extremely versatile tools, or at least tempts you into buying yet another tool to add to your growing collection.