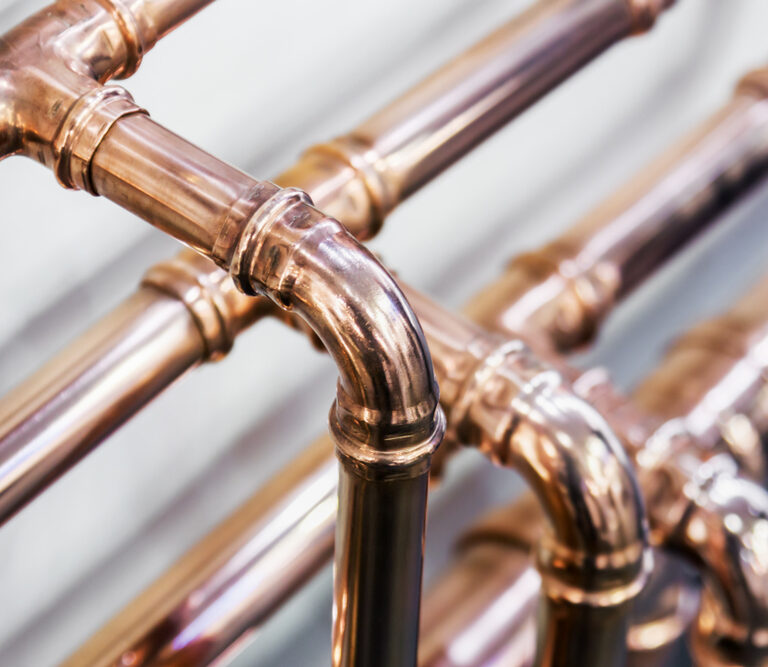 Although we don’t often see copper pipes, they’re an ever-present part of most construction projects. And rightly so, as they are incredibly long-lasting, resistant to corrosion, and can even inhibit bacterial growth.

That said, there’s more to copper pipes than meets the eye. For one, there are several kinds of copper pipes, with various factors that differentiate them from one another. Specific types of copper tubing all have advantages that fit their designed use. It would be extremely useful for anyone working with them to know the different types and how they differ from one another.

In this section, we will discuss the four main types of copper pipes that can be used in different kinds of projects.

As the name implies, the DMV copper pipe is a thin pipe that is often used in drainage and ventilation systems. It can’t withstand high pressure and direct exposure to the elements, which means it’s only suitable for above-ground and preferably indoor applications.

This type of copper piping has mostly been replaced by the relatively sturdier Type M copper pipes, though you can still see them quite often in old houses. They’re identifiable by their yellow markings.

When to use DWV pipes: As mentioned above, most modern projects no longer use the DMV pipes. However, they can be seen installed and still used in older houses as vents or waste disposal routes.

Sold in both rigid and flexible makes, this type of copper pipe is suited for low-to-medium pressure application. It can’t tolerate intense external or internal pressure due to its thin walls, so it can’t carry a lot of water all at once or be buried deep underground as the mainline.

When to use Type M pipes: In standard residential settings, this type of pipe is more than adequate for applications like in-wall plumbing.

The Type L pipe is the most well-known copper pipe around. Due to its popularity, it’s what most people refer to when they say “copper pipe.”

This type of copper pipe is sold in both hard and soft forms and is often found in interior and exterior residential plumbing systems. In terms of thickness, it’s between the thinner Type M and the thicker Type K. It’s marked with blue patterns and often costs more to buy compared to the Type M pipe.

Hard Type L is used mainly for outdoor applications since it can withstand the direct elements better than soft copper pipes. It can also withstand more direct pressure.

In addition to this, hard Type L can handle being installed undergrounds, as they can withstand corrosive, acidic water much better than Type M pipes. This much acidity can cause the metallic taste from the pipe to leak into the water and even cause the piping to fail much sooner than expected.

Meanwhile, soft Type L is typically seen in interior applications, such as piping for hot water systems and sprinklers.

When to use Type L pipes: This copper pipe is strong, durable, and versatile. If you want to be doubly sure that your plumbing will last for the next generation or two, Type L pipes are ideal for both indoor or outdoor applications. That is, as long as you don’t mind the cost.

The Type K pipe is the thickest type of copper pipe that you can find. Since it’s very thick, it can withstand extremely high internal and external pressures and can withstand the elements, including extreme heat.

It’s sold in both hard and soft forms and can be used with both compression and flare fittings. Because of its thickness, it’s the heaviest type of pipe as well as the most expensive on the list.

Because Type K can withstand pretty much everything, it’s often used in high-pressure, high-volume industrial applications. This includes mainlines for water distribution, oil distribution, fire protection, and temperature systems. Soft Type K pipes, in particular, can be conveniently buried in trenches and are not choosy when it comes to fittings.

However, this type of copper pipe can’t be used for natural gas. Although gas is harmless to the copper itself, the joints of Type K pipes are still vulnerable to the corrosive effects of natural gas.

Factors That Affect the Variety of Copper Pipes

Now that we know the four main types of copper pipes, we should take a look at the things that distinguish them from each other. In this section, we’re going to discuss the factors that affect the variety of copper tubing that you can utilize.

Copper pipe sizes are referred to by their Inside Diameter or ID. This is measured by how the amount of material that can pass through the copper tube.

A copper pipe referred to as ½-inch has an ID of ½-inch, but an outside diameter (OD) of ⅝-inch. The difference between the OD and the ID is the thickness of the tube.

Pressure and Use Case

Next to size, the external or internal pressure that the copper pipes will be subjected to will also determine the type of copper pipe that you will get.

For instance, gas pipes will have different thickness requirements than water pipes, which will further vary by the volume that passes through it and the pressure by which the materials are being driven.

If you’re planning a project, make sure that you factor in what material is being funneled through the pipes and how much of it there is at any given moment. Local building codes usually have specifications on the type of copper pipes necessary for a certain use case, depending on the service conditions, installation, and application.

Temper refers to the heat processes that the metal underwent during its manufacturing. In terms of copper, it’s manufactured in two ways: rigid and soft. They both have advantages and disadvantages that make them ideal for different applications.

This is what people typically mean when they say copper “pipes.” Also called “hard” or “drawn” copper piping, this style of manufacturing copper is the industry standard.

The pipes harden because of the drawing process during manufacturing. When manufactured this way, the copper pipe doesn’t bend easily and therefore needs to use elbow fittings of tees to go around obstacles or corners.

On the upside, this also makes the copper pipes very durable and able to withstand a lot of pressure. Because of these characteristics, rigid copper pipes are commonly used as water lines.

Soft copper tubing is made through “annealing,” a process in metallurgy that heats metal to soften it and make it more workable.

Also called “ductile” copper tubing, this style of manufacturing allows for copper that can easily bend and still retain its integrity. It can be bent to go around obstacles or corners without the need for tubings or tees.

However, unlike rigid copper tubing, it can’t withstand strong pressure. Due to this, it’s typically used in low-volume applications that are not directly exposed to air, such as in indoor residential water lines, refrigeration, and air conditioning.

The fittings in a pipe are what help connect two pipes or change the direction of the flow inside the pipe.

In addition to this, pipe fittings can also connect two pipes of different sizes, join different components, and stop flows. Some of the most commonly used fittings in plumbing are tees—used to divide the flow into two—and elbows, which are used to change the direction.

There are different kinds of ways to connect fittings and ensure they are watertight. Not all of these, however, apply to all types of copper piping.

Flare fittings, for example, can only be installed in soft pipes, not in rigid ones. That said, both tempers can either be brazed or soldered.

To sum it up, the thinner Type M is suitable for indoor applications, while the slightly thicker Type L can withstand outdoor applications more. The super durable Type K can be applied in most scenarios, but its cost makes it a less popular option. Instead, it’s primarily used in commercial or industrial applications. The last type, DMV, is rarely used in modern projects and can usually only be seen in older houses.

Before making your final choice for your next big plumbing project, make sure to note the various factors that differentiate varieties of copper pipes from one another.