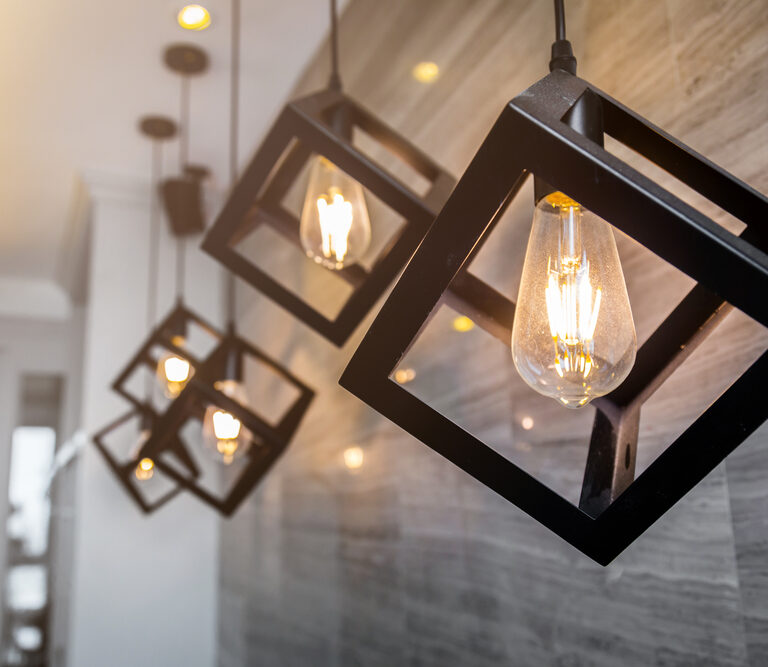 “Let there be light!”
Chances are, you’ve already heard this line at least once in your lifetime. It’s authoritative, it’s iconic. But you know what sounds better in our modern world?

“Let there be the right light!”
That’s right—not all lights are made equal. And although they’re so common in our daily lives, we rarely give attention to the type of lightbulbs that we encounter. But for a homeowner who’s trying to cut costs, a DIY designer trying to get the lighting just right, or a clueless college student trying to change a broken lightbulb, knowing the different types of lightbulbs can be immensely helpful.

Whether we want it or not, lighting affects everything we do. More than just providing illumination, it also dictates how we look in photos, how we work, even how we rest. And of course, if you want to optimize how light interacts with your life, it’s important to know the types of lightbulbs around you.

In this section, we’ll be discussing the most widely-used light bulbs in the market right now. 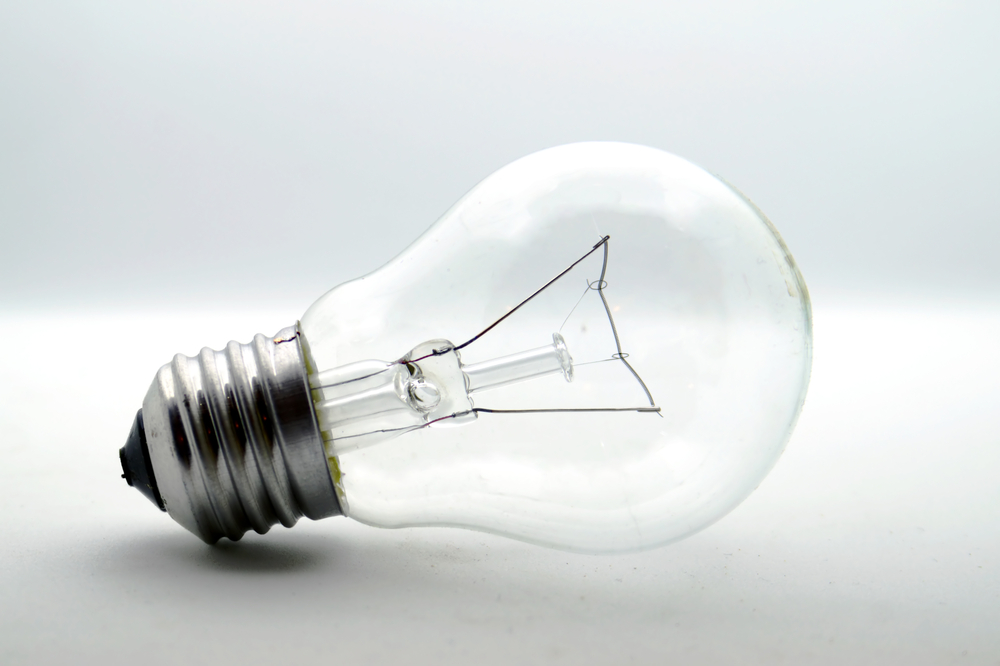 This is what usually comes to mind when people think of light bulbs. The incandescent light bulb is the classic bulb—the ones we learned to draw as a child, with the two cartoonish prongs in the middle and a twisty line between them.
Incandescent bulbs can create light by heating a tungsten filament in an airtight, glass enclosure. They’re available in different color temperatures, such as Soft White, Cool White, and Daylight.

However, incandescent bulbs are very inefficient, and even with new energy regulations that pushed for inefficient products to be phased out of the market, they are still outshined by more eco-friendly Compact Fluorescents (CFLs) and Light Emitting Diodes (LEDs) in terms of energy efficiency. This is because most of the energy that incandescent bulbs use goes into producing heat.

Nowadays, the common application of this type of lightbulb is short-term lighting, such as night lights, night lamps, and vanity lighting. It can also be used in incubators, mainly due to the amount of heat it produces. 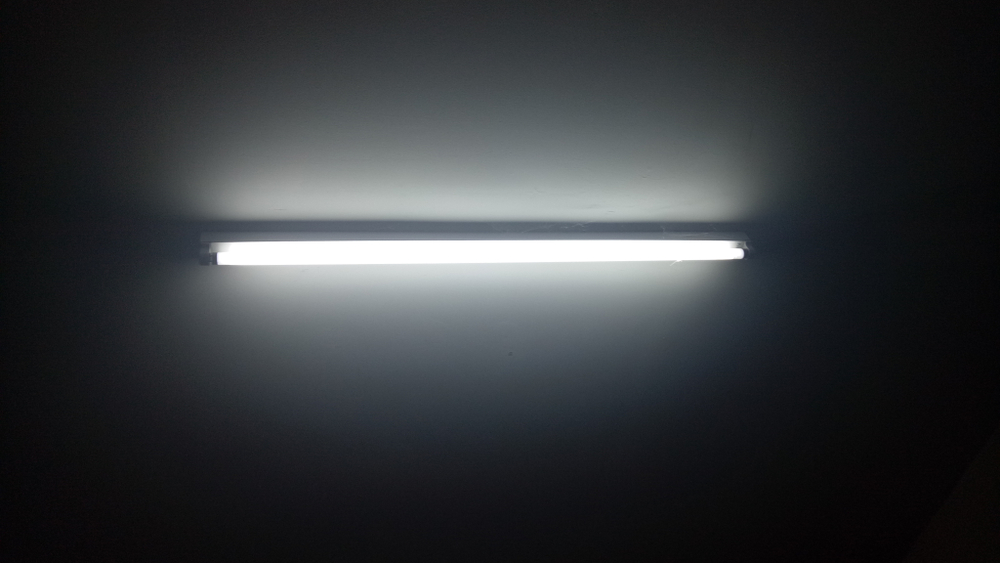 You’re undoubtedly familiar with the long, cylindrical lights that are most frequently used in warehouses and department stores.

Fluorescent lights are several steps above incandescent lights in terms of brightness, energy efficiency, and lifespan. They create light through a chemical reaction between the phosphor coating the interior of the tubes and the mercury vapor contained within.

The bright, reliable light produced by fluorescents is best for completely illuminating a wide area. You’d want to use fluorescent lighting in workshops and garages. That said, because of the mercury content, there are specific regulations for how these objects should be disposed of. 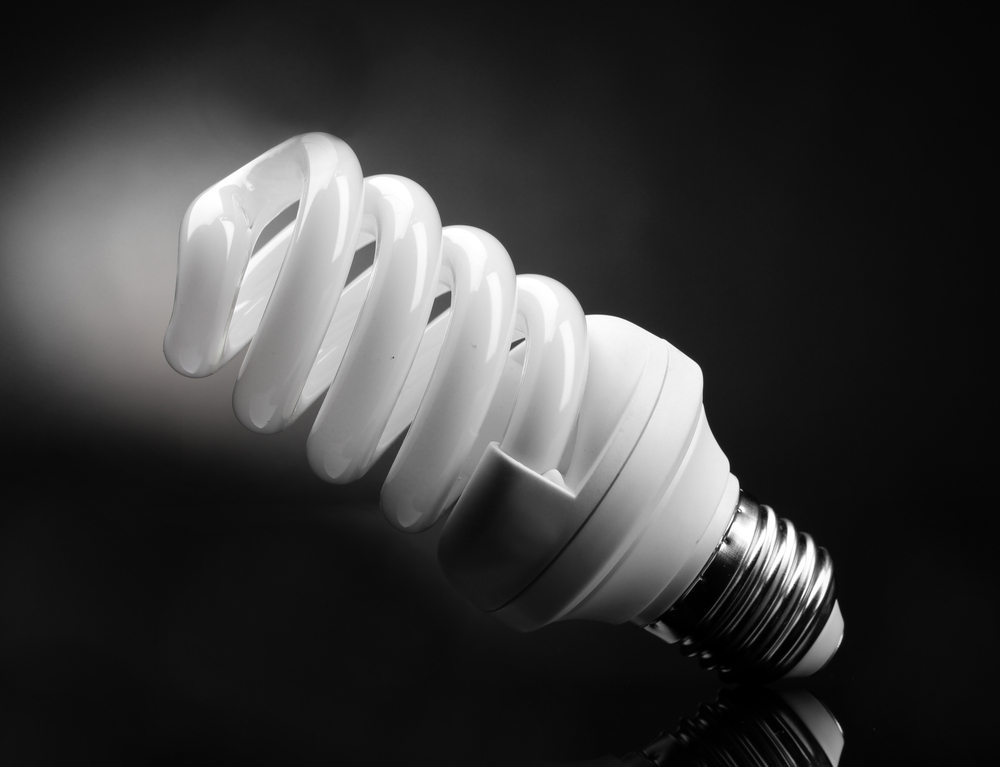 This type of light, which came about in 1976 after an engineer found out that he could bend a fluorescent tube to create a spiral, is a big improvement to fluorescent light.

It has a lot of advantages compared to the previous items on this list. For one, compact fluorescent bulbs don’t have the characteristic start-up flicker of fluorescent tubes. They also have warmer light and do not emit any noise while turned on. Lastly, they come in a lot more shapes, sizes, and installation options than fluorescent or incandescent bulbs.

CFLs are commonly used as overhead lights and task lights that don’t have to be frequently turned on and off, as this is damaging to the CFL bulbs. The living room, kitchen, and workshop areas are ideal for this. They also work well in reading lamps, but take note that most CFLs can’t work with dimmers. 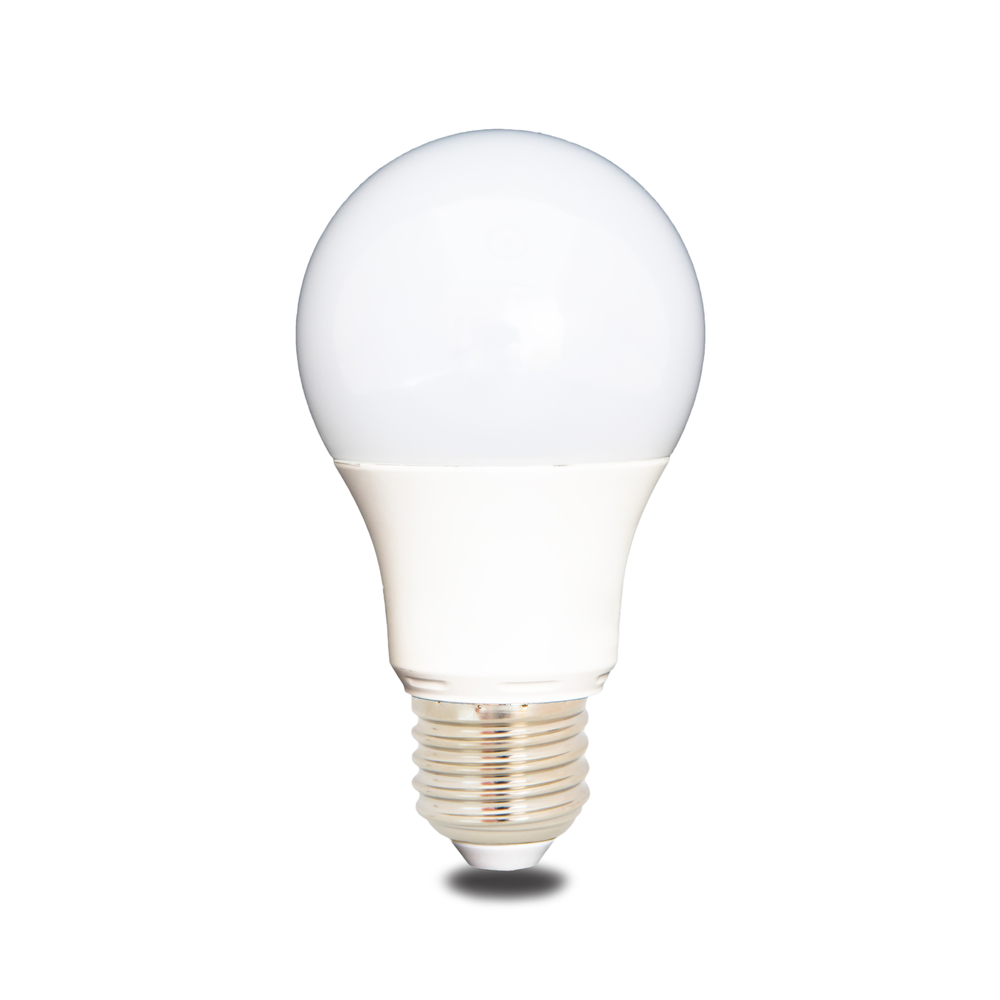 LEDs are currently the most efficient, and arguably the most popular, light bulb type in the market today.
This type of bulb produces light through a process called electroluminescence. In a nutshell, electroluminescence is a result of the characteristic of electrons themselves, harnessed in such a way to produce light when electricity is passed through it.

As a result, LEDs are powerhouses when it comes to lighting, despite not needing large amounts of power. It generates virtually no heat compared to all the other bulb types. It’s available in a wide variety of color temperatures, intensity, and scale, and can even be integrated with software programming. It’s also the most environmentally friendly, to boot. So, if you want to save money on electricity and save Mother Nature at the same time, LEDs are for you.

LEDs can be used just about anywhere, from the overhead lighting in your living room to the outdoor lighting on your front yard, as well as to more specialized lighting needs such as aquariums, ponds, and even fountains. 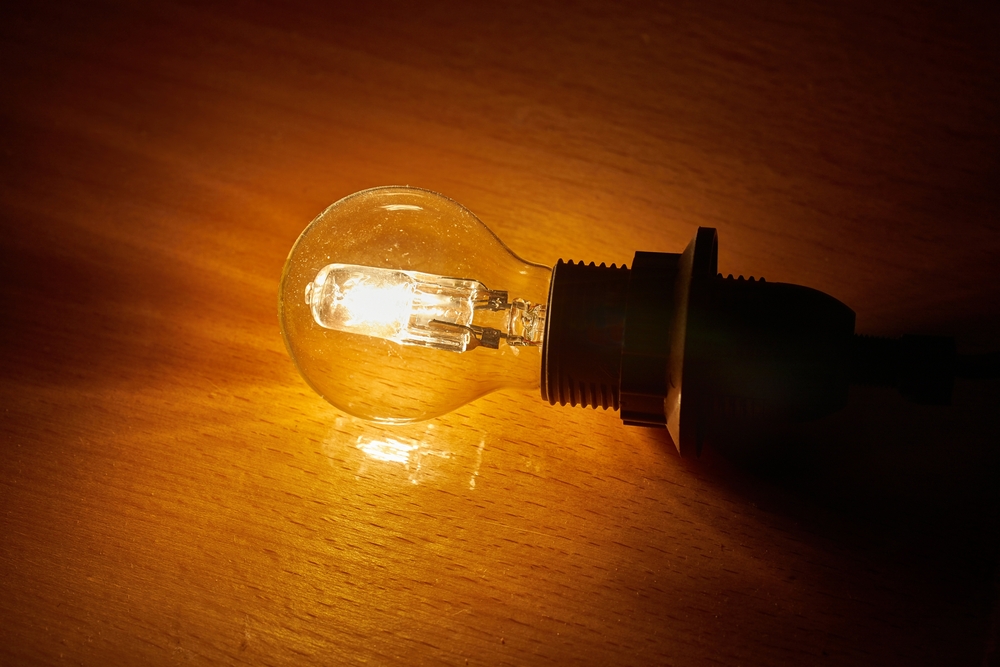 This type of light bulb emits a bright, white light that is said to be closest to daylight.

Somewhat like an upgraded version of the incandescent light, it produces light through heating a tungsten filament, much like incandescent bulbs, with the exception that the filament is encased in an airtight envelope with a variety of halogen gas such as bromine or iodine. The result is a chemical reaction called the halogen cycle, which increases the lifespan and preserves the clarity of the bulb.

Halogen lights aren’t as inefficient as incandescent bulbs, but they’re not as good at harnessing energy as LEDs and CFLs. More than that, halogen lamps run extremely hot. Because of its bright-and-hot nature, halogen lamps are more commonly used in outdoor spotlights. They’re also ideal for accent lighting.

What You Need to Know About Light Bulbs

Before you purchase your light bulb, it’s important to have a fundamental understanding of the basics. This section contains all the relevant information that you need to make an informed decision when choosing the right light bulb for you.

A couple of years ago, the best way to tell the brightness of a bulb was by looking at its wattage. Traditionally, the brighter the light bulb, the more power it consumes.

But technological advancements have made it possible for light bulbs to be bright and still be power-efficient. Nowadays, even light bulbs of the same wattage can have different brightness.

Wattage is a measurement of energy consumption, not brightness. When incandescent lights were the only type of light bulb around, simply knowing the wattage was usually enough to tell how bright a bulb would be. Back in the day, if you wanted brighter light, you went for the bulb with the higher wattage.

If you want bright lights but you don’t want your electric bill to soar, choose something with low wattage but high lumen. Do take note that you might have to pay more outright for more energy-efficient bulbs, though. For instance, these LED lights are 9 watts each and give out 800 lumens. But these ones, which are double the price, are 8 watts each and give out 1400 lumens.

How long a bulb can last should also be one of your prime considerations when choosing what to pick.
The lifespan of a lightbulb largely depends on the way it generates light. Incandescent bulbs, for example, generate light through the repeated heating and cooling of a metal filament. The bulb “burns out” once this metal filament breaks down because of metal fatigue. Similarly, CFLs also burn out their metallic electrodes over time.

The longest-lasting light bulbs on the list are LEDs. They don’t really burn out, but their brightness could decrease after several years once the diodes degrade. This usually takes ten years or so though, so you should be safe with an LED purchase. That said, they also generally cost more upfront than other types. 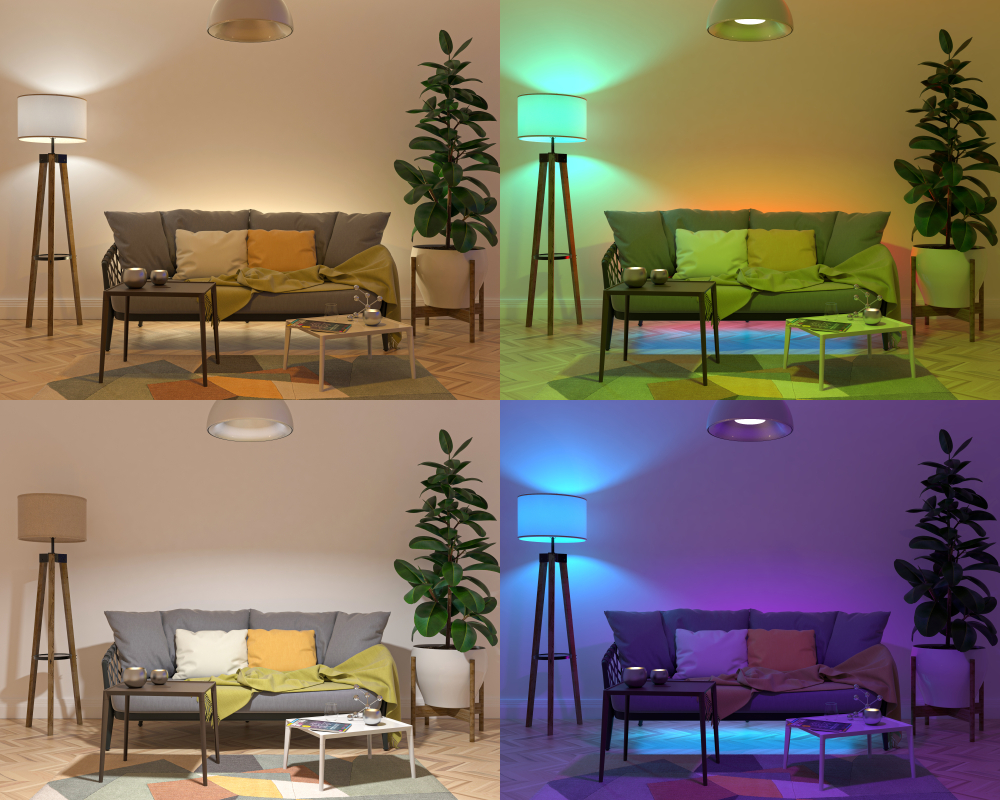 This refers to the ‘color’ or ‘light feel’ of the light bulb’s output. It’s measured by Kelvin, denoted with a small ‘k’—not to be confused by the large ‘K’, which means another thing entirely.

Although it doesn’t have anything to do with heat, a light bulb’s color has a “warm to cool” scale, which corresponds to the Kelvin of the light. Warm tones have a Kelvin rating of about 1900, while cool tones have about 6000k.

The appearance of light is important since it can impact the atmosphere that we want in the space that we want to illuminate. According to studies, it can even have certain effects on our minds.

When considering the type of light bulb that you want to buy, it is only prudent to calculate how much it’s going to cost you in the long run. Knowing the annual estimated cost will help you create a more accurate picture of the financial impact that choosing a particular light is going to make.

This estimated cost isn’t only related to the electric consumption of your unit. It also depends on how long the light bulb is going to last. After all, you can’t save money if you have to change your bulb every two months.

The more electricity a light bulb consumes, the more it will cost you in the long run. Energy-efficient bulbs, on the other hand, don’t consume much electricity, and therefore wind up saving you money.

In addition to this, energy-efficient bulbs are “greener,” meaning they produce less waste and are better overall for the environment than their counterparts. You can get a measure of energy efficiency by dividing lumens by watts.

Even if we don’t think much about it, lighting affects everything that we do. It’s only natural that we choose the right type of lighting for our specific needs.

The best way to do that is to compare the brightness, cost, durability, appearance, and energy efficiency of the lights you’re considering. Once you do that, you should be able to choose the right type of light bulbs that you want.