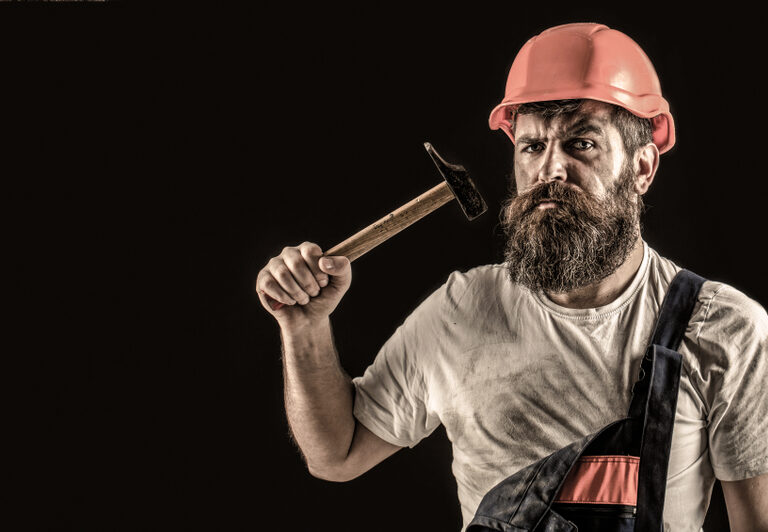 If there’s one tool that almost everyone can recognize, it’s the good ol’ hammer. After all, it just has a wooden handle and a metal head, right? What’s so difficult about that?

Below, we’ll fill you in on everything you never realized you needed to know about hammers, including how to recognize them and what to use them for.

You won’t necessarily come across every single hammer on this list in your life, as some of them are quite specialized. It can still be interesting to learn about all the different types out there, though. 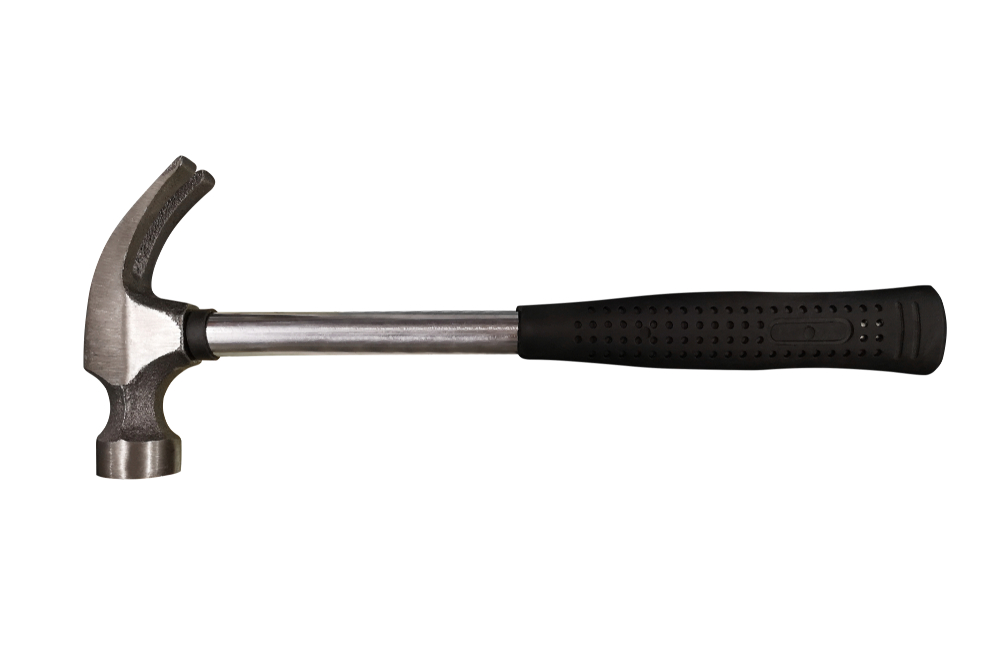 This is likely what you picture when you imagine a hammer (why you’re sitting there, imagining hammers, is a mystery to us). It has a handle made of wood, steel, or fiberglass —sometimes with a rubber grip.

The head features a blunt striking area on one end and a curved claw on the other. The claw can be used to pull up nails and floorboards (or as a back-scratcher in a pinch).

A framing hammer looks just like a claw hammer, except it’s a bit heavier. It also has a waffled striking surface instead of a flat one, as that prevents the head from slipping when driving nails. The claw is also flatter, making it easier to pull out errant fasteners.

As their name suggests, framing hammers are used to create . They’ll leave an imprint in the wood due to their waffled surface, though, so they’re not used for finishing work. 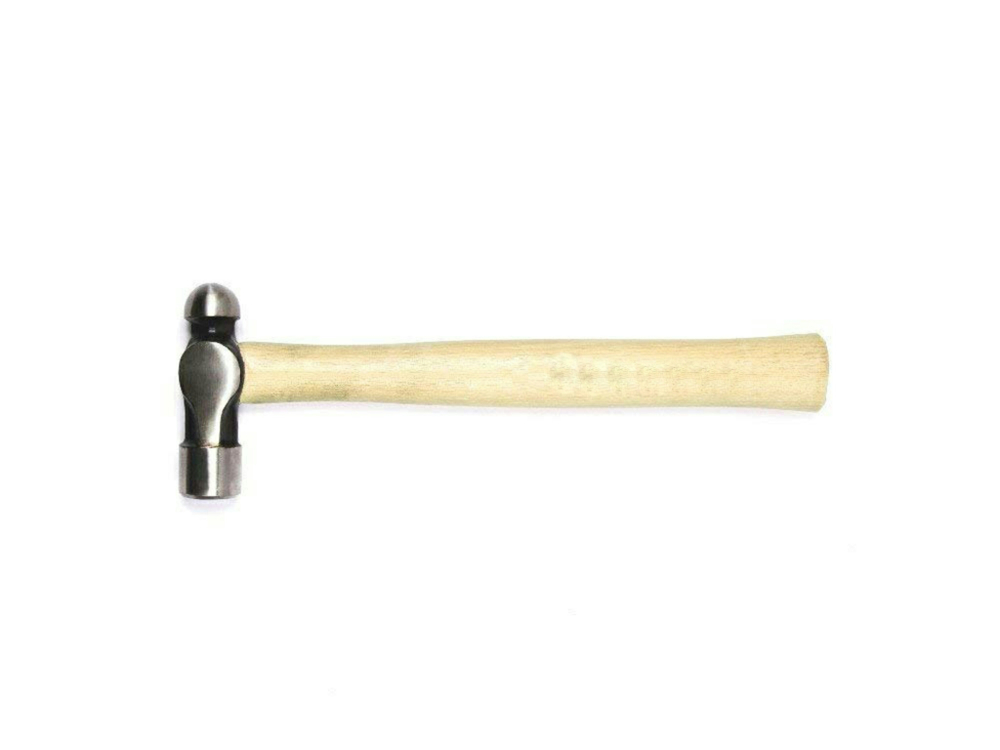 The ball peen hammer has a flat surface on one end and a rounded one on the other; it’s designed for shaping metal, such as rivets and other fasteners.

There are several different kinds of ball peen hammers, including cross and straight peen hammers, as well as cross peen pin hammers.

This is the granddaddy of all hammers. Incredibly big and heavy, it’s used to drive stakes or break up surfaces like brick or concrete.

Swinging a sledgehammer isn’t simple, and requires a bit of coordination (and a lot of power, which is why it’s often used in gyms to build core strength).

The club hammer is basically a smaller, handheld sledgehammer. It’s often used for driving steel chisels and masonry heads, and is excellent for demolition work. 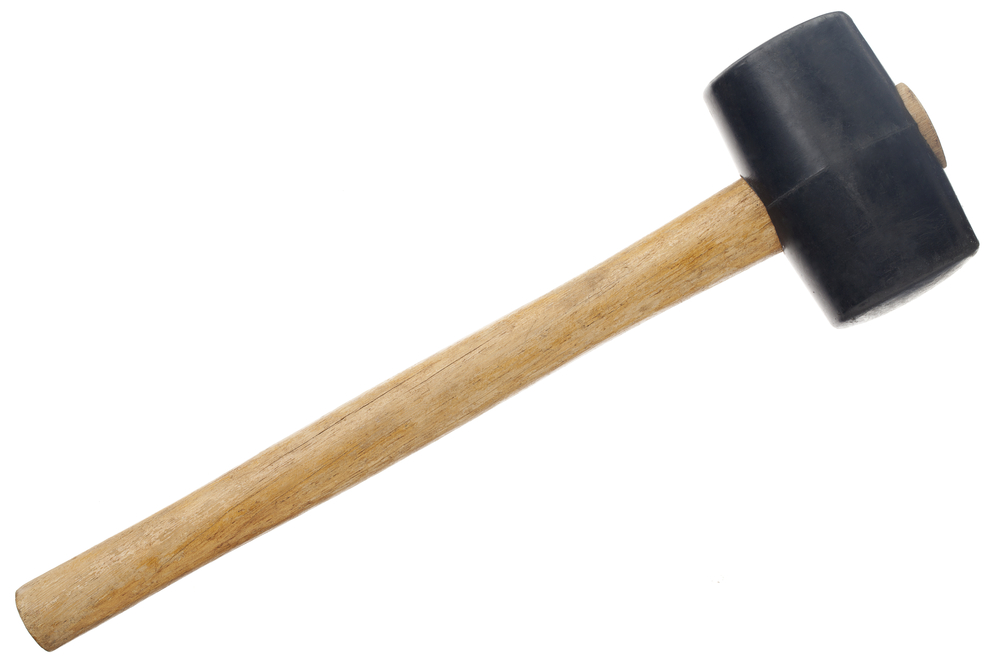 This variety has a rubber head with two flat surfaces on either end. It’s designed to allow you to pound on surfaces without damaging them (or to test your reflexes at the doctor’s office).

This hammer usually has a plastic or rubber head that’s filled with sand or lead shot. This minimizes recoil, allowing you to tap lightly on surfaces. As a result, it’s used in fixing dents on cars, joining wood without damaging it, and gently dislodging stuck parts.

Also called an upholstery hammer, the tack hammer was created to secure fabric to furniture frames. It usually has two, claw-like heads, one of which is magnetized to hold nails in place.

The blacksmith’s hammer has a flat surface, as well as one that’s slightly tapered and rounded. It’s made for shaping steel against an anvil, so you’ll often see it throwing up massive amounts of sparks as you use it to pound out a sword for use in battle against the evil Sheriff of Nottingham.

Also called a masonry hammer, the brick hammer looks like a claw hammer, except it has a longer, thinner head. The claw can be used as a chisel to score surface, while the other side can split bricks.

The hatchet hammer has a flat surface on one side, and a — wait for it — hatchet on the other. This makes it a very versatile tool, and many survivalists carry one with them in their emergency kits.

While it may sound like an Orson Scott Card novel, a joiner’s mallet has a tapered block at one end instead of a metal head. It’s used for driving chisels and tapping wood joints together.

Closely resembling a hatchet hammer, the drywall hammer has a flat striking surface and a notched end that can hold nails in place or chop off excess bits of drywall.

The bushing hammer has a textured metal head, not unlike that of a meat tenderizer. It can add texture to stone, making it more attractive or less slippery to walk on.

This model has a narrow, cylindrical head made of brass. It allows the user to tap steel pins without damaging the surface around them.

This heavy hammer has a stubby, rounded head that’s used for driving lag screws or bolts into telephone or electrical poles. The grip is often padded to help absorb shock.

This hammer has a small, convex head with a peen on one end and a cylindrical die on the other. It’s used to gently smooth metal over a planishing stake, and is often found in the aviation and automotive industries. 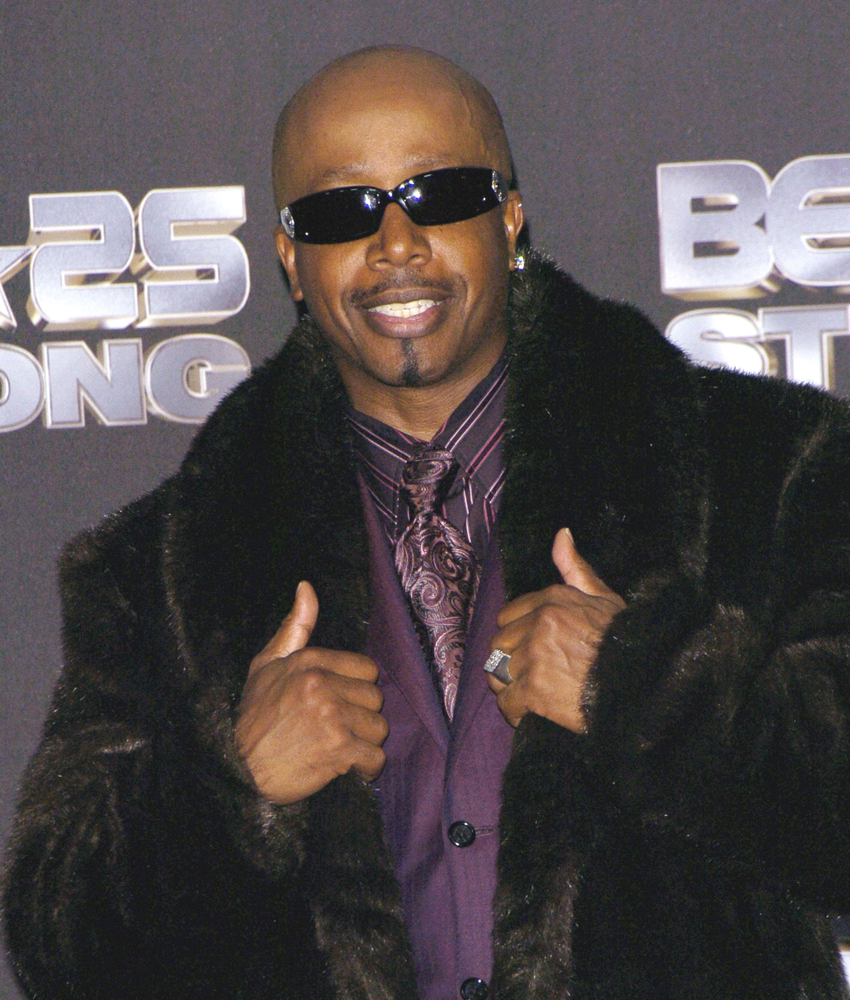 Once wildly popular, this model has fallen out of favor in recent years, likely due to the fact that you’re not allowed to touch it.

The rip hammer is basically a bigger, heavier version of a claw hammer, except with a flatter claw. It’s often confused for a framing hammer, but a rip hammer is designed for demolition rather than construction 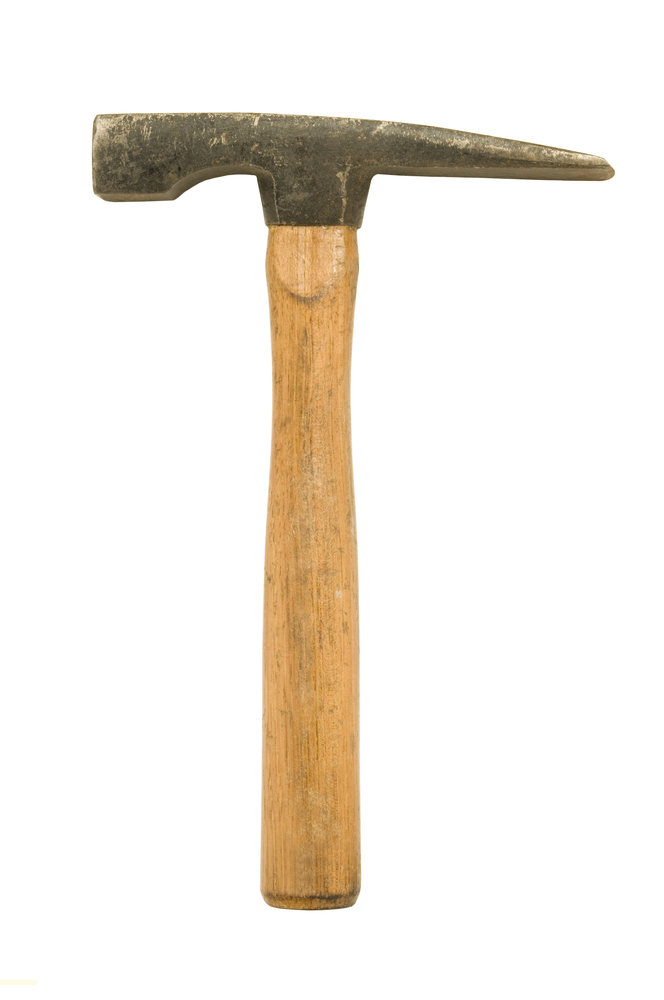 Fans of The Shawshank Redemption will recognize this small tool with a flat head and a chisel on each side. It’s used to break up small rocks, so you’ll find it carried by geologists, tucked inside an archaeologist’s bag, or hidden behind a giant poster of Rita Hayworth.

The scaling hammer has a chisel and pick at the end of its handle, and it’s used for removing rust and other unwanted hard coatings from various surfaces. They also come in pneumatic models for serious descaling work.

Carried by rock climbers, the piton hammer has a regular peen and a claw with a hole in it for removing pitons They’re sold in both heavy and light varieties, with lighter hammers having hollow handles.

Sometimes called a roofing hammer, the shingle hammer is a versatile piece of equipment. It has a flat head, a spike, and a small claw. The claw is for removing nails, and the spike is for putting little holes in shingles before you hammer a nail through them.

This hammer has two round surfaces, both of which are made of soft materials (usually plastic, rubber, or copper). It’s used on delicate materials, like chrome.

This model has a thin, square head and a sharp claw. It’s used for completing seams or setting rolled edges in metalwork.

This hammer looks like a regular ball peen hammer, except with one major difference: there’s a magnifying glass square in the center of it. It’s used for delicate machining work (or for barbecuing ants, if you have small children around).

Unlike many of the other hammers on this list, it’s the handle of the welding hammer that makes it so unusual. It looks like a giant spring, and it’s made that way to dissipate heat. The head has a round chisel on one end and a vertical one on the other, and it’s used to knock slag off of beads once they’ve cooled off.

These strange-looking hammers don’t have typical heads; rather, they have grooves on either end that hold . These combs are used to remove old mortar from bricks.

This hammer has a round, flat head on one side and a conical die on the other for tapping dents out of car panels. You’ll never guess who uses it (unless you guessed mechanics).

An electrician’s hammer is a regular claw hammer, except it has a longer neck. This lets electricians get to nails that they otherwise wouldn’t be able to reach.

This hammer has a handle with a fat end, while the head looks like a typical ball peen hammer, albeit with a larger flat end. It’s used for shaping metal jewelry (and, presumably, chasing people).

The blocking hammer has a flat, square head set alongside a cylindrical one. It’s typically wielded by blacksmiths in order to shape metal.

These hammers have very long handles with a long, thin head at the end. It’s used for hammering home railroad spikes from the opposite side of the tracks (and no, we have no idea why you can’t just move to that side of the tracks to hammer the spikes).

This is a variation of the sledgehammer that’s used by masons. It has an oval striking face and a chiseled peen for scoring lines.

This is a miniature version of the classic claw hammer. It’s used to gently drive trim nails into wood without damaging it.

And there you have it, our exhaustive list of practically every type of hammer in existence. If you can’t find the right one for the job on this list…then, seriously, what the hell kind of project are you working on? 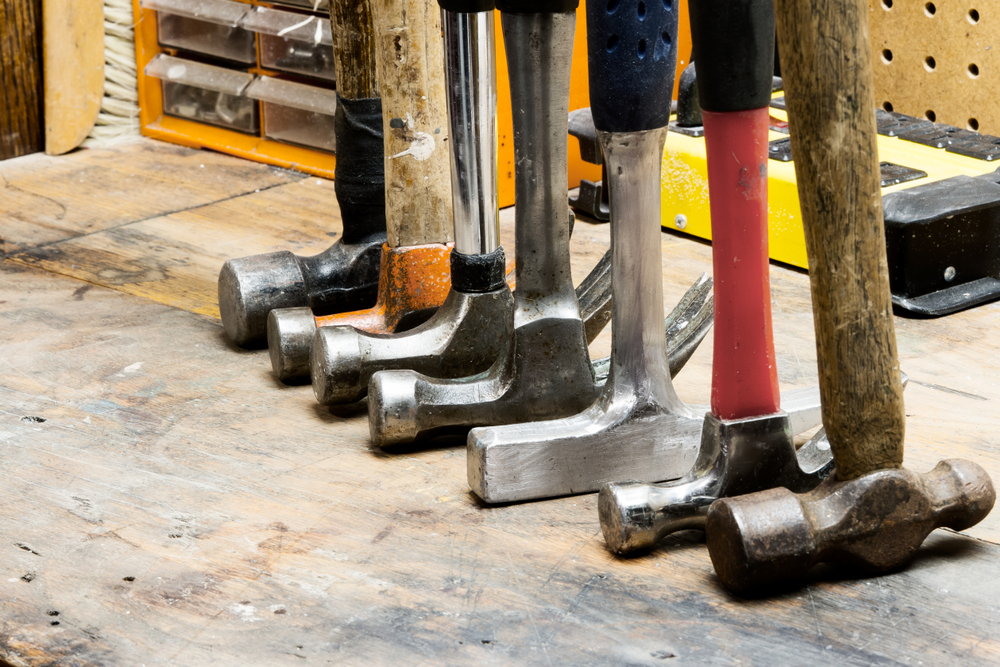 Chances are, this list has answered more questions about hammers than you ever thought about having. It can come in handy, though, as many of the varieties on this list are perfect for specialized purposes, so you don’t have to try to use a standard claw hammer for everything anymore.

Remember, though, that no matter its original purpose, every hammer on this list is perfectly designed for smashing your thumb into oblivion.