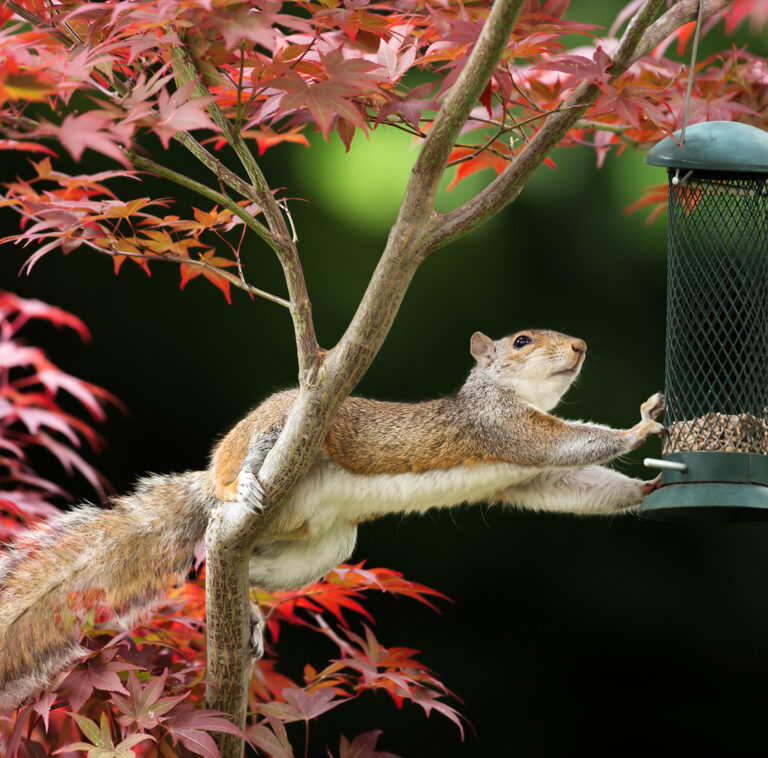 My grandfather once asked me, “Are you smarter than a squirrel?”

At first, I thought he was joking. Of course I’m smarter than a squirrel—they’re just hyperactive rodents after all. But then he said, “Okay, so how would you, Mr. Smart Guy, keep the little tree rats out of my bird feeders?”

I rattled off a few ideas, but each one was met with, “Tried it. Didn’t work.”

After shooting down all of my ingenious ideas, he had me go outside to “watch the little tree rats at work.”

When I stepped into the yard, I noticed at least a dozen different bird feeders all of varying heights, shapes, and designs. Some of them were on high poles, while others were hung from long wires with all kinds of baubles and trinkets strung around.

They were all positioned throughout the yard in what looked like an utterly haphazard layout, and each one of them either had a squirrel happily munching away on, in or under it—or the feeder had already been ransacked. Some of the feeders were knocked over, others were wobbling wildly out of control, and still, others had already been emptied of their birdseed and were left strewn about the yard looking like the corpses of their former selves that had been picked clean to the bone.

I glanced back toward the house and saw my grandfather watching me with a knowing gleam in his eye. I went home that day thinking, “Am I smarter than a squirrel?” 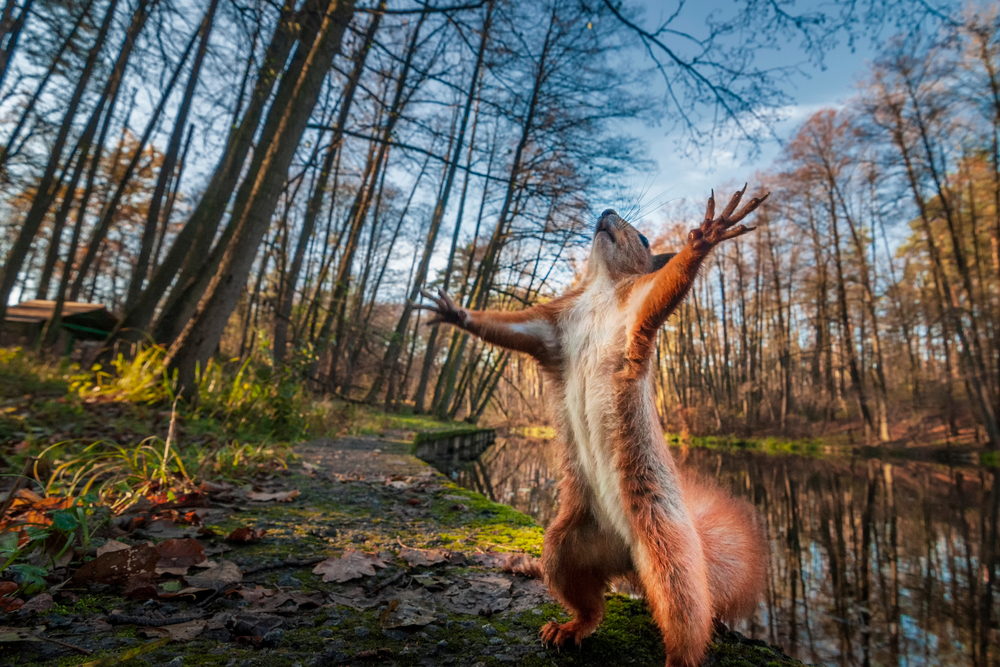 Whether or not I can outsmart a squirrel is still up for debate, but maybe you can put to use some of the things I learned since that profound day. Here are some simple and humane tips that might aid you in your quest for keeping squirrels away from your bird feeders.

If your bird feeders are plagued by unwanted squirrels, relocating is a quick and easy method for deterring them. If possible, keep bird feeders away from trees, fences, and anything else the squirrel can use to gain access to the feeder. However, finding a spot that is actually safely out of the reach of a squirrel is no easy task.

Squirrels are stupendously athletic creatures. They are capable of leaping around 5’ vertically, 10’ across, and can safely fall from heights up to 100’. Seriously, they use their tails as parachutes.

Worse still, squirrels can climb virtually anything they have a mind to thanks to their sharp claws and ankles that are capable of rotating 180 degrees in any direction. And they are more than happy to spend the entire day trying out new angles and approaches to reach a store of food.

Considering all of that, the safest place to position a bird feeder so that squirrels can’t get to it is on the moon. But I wouldn’t bet against them figuring out a way to get up there either. 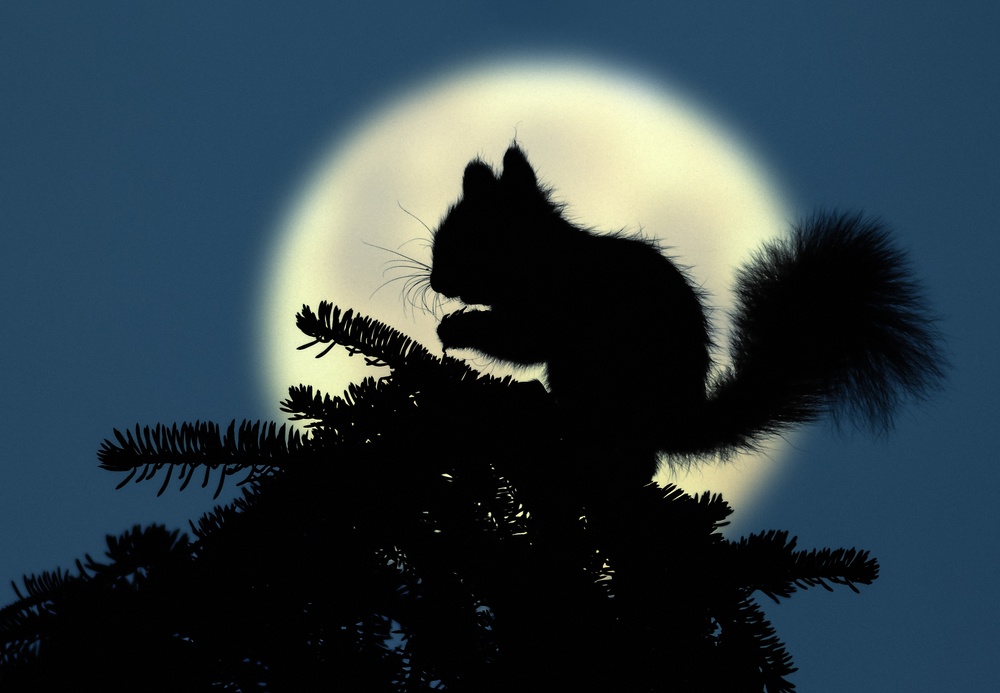 Engineers much smarter than I designed some pretty nifty “squirrel-proof” bird feeders like the Squirrel Buster Plus or Woodlink’s less bombastically named Squirrel Resistant Feeder. Feeders like these use a clever spring tension system that is connected to bird feeder doors which get pulled down into a closed position when there is too much weight on the base.

Squirrels weigh a lot more than birds do, so these systems can be calibrated to allow birds to feed from them while preventing squirrels and other heavier animals from getting to the seed inside. Some of these feeders like the Squirrel Buster Plus even let you calibrate the spring system to modify how much weight is required to shut the doors.

You could also go the caged route with something like this Caged 6-Port Feeder. Attaching some caging to your pre-existing feeders could be a good money-saving option for DIY types.

However, squirrels can always just knock these down or hang from something nearby while they dig out all the seeds. Finding a good spot for one of these feeders may do the trick, but I would never count the squirrels completely out, even with this solution.

There are a lot of attachments and modifications you can make to existing bird feeder setups. Baffles like this Woodlink Wrap Around Squirrel Baffle or this Torpedo Steel Squirrel Baffle can have a lot of success in deterring squirrels. They can be installed pretty quickly on bird feeder poles to throw a wrench in the tree rats’ plans for global domination.

There is also the old home remedy of attaching a Slinky to bird feeder poles, making it much harder for squirrels to climb. This is a clever and inexpensive idea. However, once again, squirrels aren’t known for giving up easily and this “solution” is not guaranteed to work against particularly clever rodents.

Squirrels aren’t terribly picky eaters for the most part, but they generally don’t care for finer seeds like these Nyjer Thistle Seeds or these Safflower Seeds. You can also turn up the heat on your squirrels by mixing in something like this Flaming Squirrel Seed Sauce or trying out some pre-spiced birdseed mix like this Sizzle N’ Heat Bird Food.

Mammals, like us and our squirrel friends, are sensitive to capsaicin (that’s the chemical that makes food spicy for us), but birds can’t detect it at all. Spicy additives are harmless to both birds and squirrels, but the furry critters should be put off by the heat.

Do note, however, that particularly ravenous squirrels are likely to eat anything that will provide them with the nutrition they need, and you might just end up with fire-breathing squirrels wreaking havoc in the neighborhood.

Keep Your Yard Clear of Feed

Cleaning up your yard around the bird feeders on a regular basis is a good idea for a number of reasons. For one, the discarded seed that’s left on the ground can rot or become contaminated—posing a health risk to squirrels and ground-feeding birds that might ingest the hazardous seed.

Another reason is that seeds scattered on the ground will undoubtedly attract the attention of nearby squirrels. Once they start associating that area with food, they’ll start getting curious about where the source might be, increasing the likelihood that they begin their attempts at subverting your anti-squirrel measures in the first place.

However, birds are going to drop seeds on the ground as they feed and there’s not really anything you can do about that. And this leads me to my final piece of advice for keeping squirrels away from bird feeders.

Give Up (and Feed Them Yourself)

There is honor in admitting defeat when you have been bested. And I think I’m finally ready to admit that I’m no smarter than a squirrel. If you’re thinking along the same lines as me, then maybe the best solution is to simply stop trying to keep squirrels out of your feeders and instead give them one of their own.

This squirrel feeder is inexpensive and doesn’t require any real setup or upkeep. Just fill it up with whatever nuts, seeds, or corn you feel like and leave it on the ground near a tree or hang it from one for the squirrels to easily access it. Squirrels that have easy access to their own food will have little reason to go after the birds’.

You could even have a little fun with it and string up one of these hilarious Horse Head Squirrel Feeders so the squirrels get to eat and you still get to feel like you’re the one outsmarting them.

As they always say, “If you can’t beat them, feed them.”