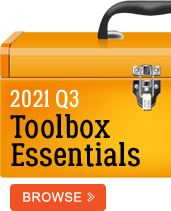 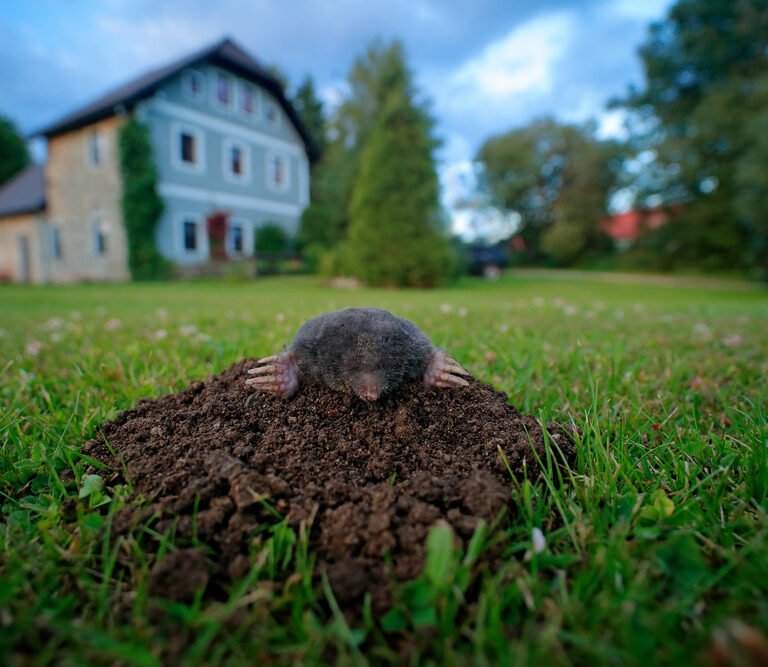 If you’re here because you need skincare guidance or there’s someone in your group of friends you don’t fully trust, you won’t find much valuable information here. This guide is strictly about eradicating those little (and seemingly blind) mammals that dig extensive tunnels in yards, gardens, and golf courses.

Each one of these dedicated miners constructs around 50 to 100 mounds in their lifetime, all while building seemingly endless tunnel systems on their quest for worms and insects to eat.

However, the constant digging of these animals is more than enough to ruin the roots of plants. Although it may not seem like it at first, these guys have nothing against you; they’re just doing what their nature dictates. In fact, by digging and bringing fresh underground soil to the surface, they’re actually fertilizing the land outside their tunnels.

Sadly, they cause more destruction than good, so knowing how to get rid of them responsibly is a must for anyone suffering from their presence.

Depending on the state, some laws prevent the use of specific methods to get rid of these animals, and therefore, it’s essential to know the regulations you need to follow.

For example, in the state of Washington, traditional mole traps are not permitted, and the relocation of plants is advised so that both people and moles can co-exist. Local regulation can vary greatly, so we strongly advise that you clarify the law in your local area before following the below methods.

Best Ways to Get Rid of Moles 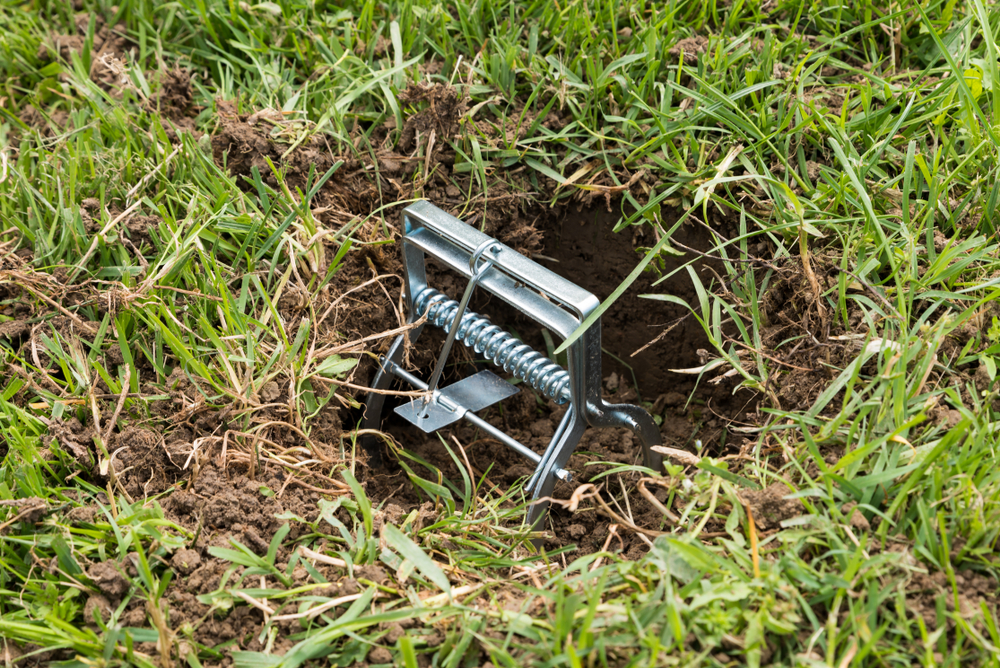 There are many different types of traps available. Their effectiveness depends a lot on the kind of mole you’re trying to catch, which is why identification is so important, as we cover in a later section.

In the United States, there are two kinds of traps that are used, the “claw-tunnel” and the “harpoon type.” While both operate almost in the same way, their main difference is that “the claw” is the most recommended in the United States’ western side, while the harpoon is designed for reaching eastern moles that have tunnels deeper in the ground.

Aside from the trap, you will need a thin probe that’s at least 6 to 10 inches long—this is usually how deep mole tunnels go. To find a tunnel for the trap:

These baits are usually more effective with moles that have diverse diets, like the Townsend mole. It may be challenging with moles that only eat insects and worms as their diets are very restrictive. For example, in Oregon, the use of zinc-based phosphide as a general toxic bait is quite common.

Patience is the name of the game, as it may take a while for the mole to find the bait through the tunnels.

Don’t worry if you keep seeing new molehills after a couple of days. Simply try to find a new tunnel and repeat the process. This method may seem like a war of attrition, but it’s the best option for large properties that suffer from widespread infestations.

How Not to Get Rid of Moles

There are further techniques mentioned online, but these could cause you more problems. They may also cost you more than the traditional, proven ways to get rid of moles that we discussed above. Some ineffective remedies to watch out for include the following.

We tend to confuse moles with other animals, such as gophers and voles. While these animals all have different physical attributes that would make them easy to identify, it’s rare to see them outside of the tunnels they make, so it can be hard to tell the difference.

The most effective way to get rid of these critters boils down to knowing precisely what it is that’s plaguing your garden. That’s because some methods are more effective for certain species. However, it’s not uncommon to find a combination of these animals living in the same areas. To make your life easier, here are some of the easiest ways to identify moles and mole imposters.

Gopher mounds tend to be surrounded by fresh soil and are heart-shaped. Unlike moles, their mounds are not entirely circular and don’t look like large ant hills; they instead give the impression that something has been recently digging beneath the surface.

They bring subsoil to the surface, making the land more fertile, but unfortunately, they also exclusively eat plants and vegetables. They’re good for the soil but not for farming.

Trickier to identify are these little plant-eaters, which use the same tunnels created by moles and gophers. They eat a large variety of plants and veggies. They’re often attracted to large pockets of vegetation, so always keeping your lawn or garden trimmed down (you can see the best electric lawn mowers here) is an effective way to prevent them from invading your land.

Just because gophers and voles tend to be destructive doesn’t mean moles aren’t. Their tunnel systems and mounds pose a serious threat to any garden, yard, or farm. Their mounds are circular and have a plug in the middle, making them look like tiny volcanoes.

The best way to get rid of moles and other digging pests is to be prepared for them.

For example, if you have a small garden or an orchard, consider getting an underground fence that runs around 10 inches deep to protect the plants. Moles that come in contact with the fence would much rather dig somewhere else than deal with it.

Moles are attracted to humid soil, as that is where they find most of their food, so improving the drainage system in the area would be another effective way to keep them out.

You can also pair both methods for a more efficient way of deterring their presence. Although prevention is important, sometimes it’s not enough, and these methods are not always feasible for large areas like farms and golf courses where moles can dig to their heart’s content. 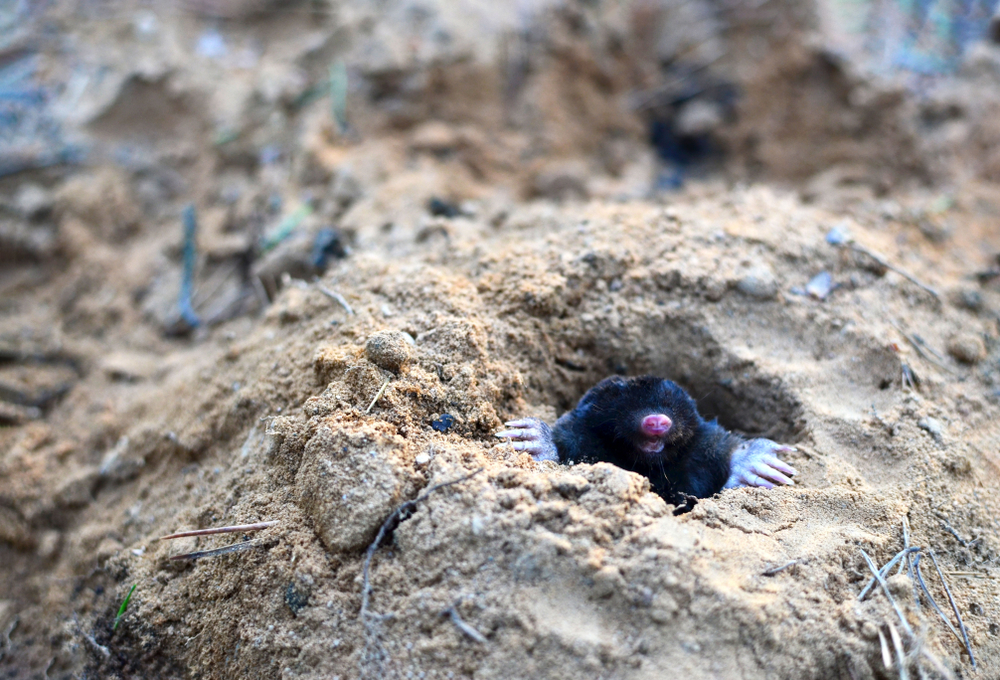 On a final note, if you’re not suffering from a severe infestation or if your livelihood is not on the line, consider co-existing with the mole in your yard. Even if you get rid of the unwanted tenant, you’re likely to find another one appearing soon because they like the soil around you.

You can always clear their hills quickly with a shovel or your boots and then place a fence inside your garden to protect it. Sometimes we can obsess over the look of things, forgetting that nature looks the best when we simply let it manifest itself.