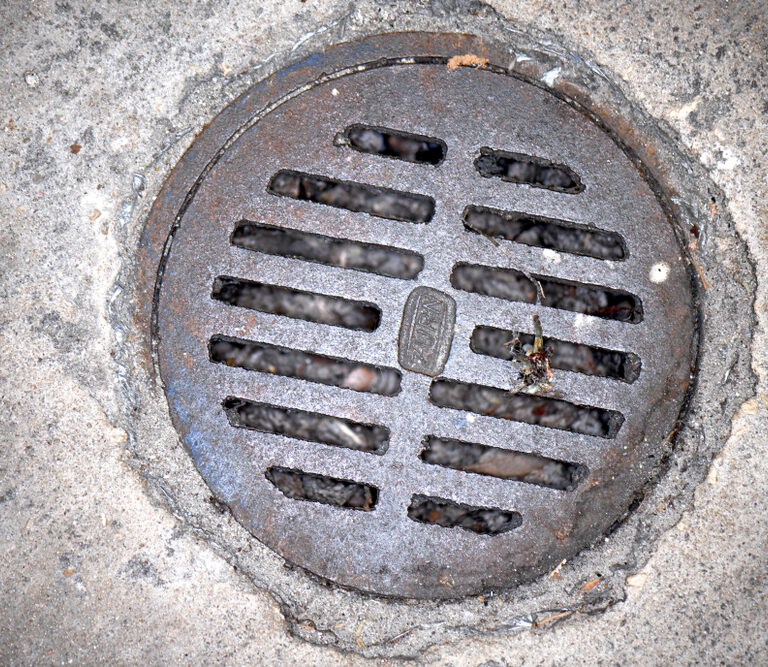 The basement is prone to water damage, whether from flash flooding or a leaky joint upstairs. That’s why modern building codes mandate the installation of an appropriate basement drainage system—otherwise, you’d inevitability find yourself faced with a murky, muddy mess.

Installing a drainage system is far easier at the time of construction, so it pays to get something sorted right off the bat. Nonetheless, it’s still possible to install a new system in an old home. And although expensive, it could be the only viable solution for alleviating your subterranean drainage woes.

To help you wrap your head around the bewildering basement drainage world, we’ve covered the top three systems for the everyday home. We’ll discuss the advantages of each and throw you a few extra tips so you can gauge which option is best for you.

Floor drains are among the most common basement drainage systems in America and typically reside in the utility area to drain water away from washing machines and other appliances.

The system works by laying a concrete floor with a slight gradient to guide water into a drain pipe. The pipe carries the water down towards a collection pit where a sump pump will expel it to the surface again.

In the past, it wasn’t uncommon for the drainpipe to flow directly into the town sewage supply. These days, however, this method is rarely used because a clogged sewer can force water to back up through your pipes and leave a smelly mess on the basement floor.

The bad news for homeowners is these systems should be installed during construction. The sloped concrete floor is an essential component, and most existing basements have been built with a level floor. Transforming a level floor into a gradient is a monumental task involving many man-hours and heavy machinery—expect to fork out five grand or more.

But if you’re building a new home, the standard floor drain system is well worth considering—in fact, many municipal governments mandate their use through building codes.

If you live on a flood plain or your house sits at the bottom of a hill, tile drains are great at preventing water from entering your basement. The system stops water pooling around the exterior and seeping down, saving you a major headache every time you get hit with heavy rain.

After pouring the foundation walls, a contractor will install a flexible drain pipe around the entire exterior perimeter at the bottom of the wall. Gravel gets placed on top to filter out dirt, and the pipe leads water to a collection pit from where it’s expelled with a sump pump.

In wetter regions, the municipal government may mandate exterior drain tiles in all new homes. Even if there’s no legal requirement, the system still isn’t a bad idea, especially if you’re worried about water pooling around your house (a potential problem when located below a hill).

Installation is easy during the construction phase—set aside about a thousand dollars to get the job done. But the process becomes a nightmare in an existing home as you’ll need to pay for heavy machinery to excavate the entire perimeter—allow closer to ten thousand dollars, give or take, depending on the size of the foundation. 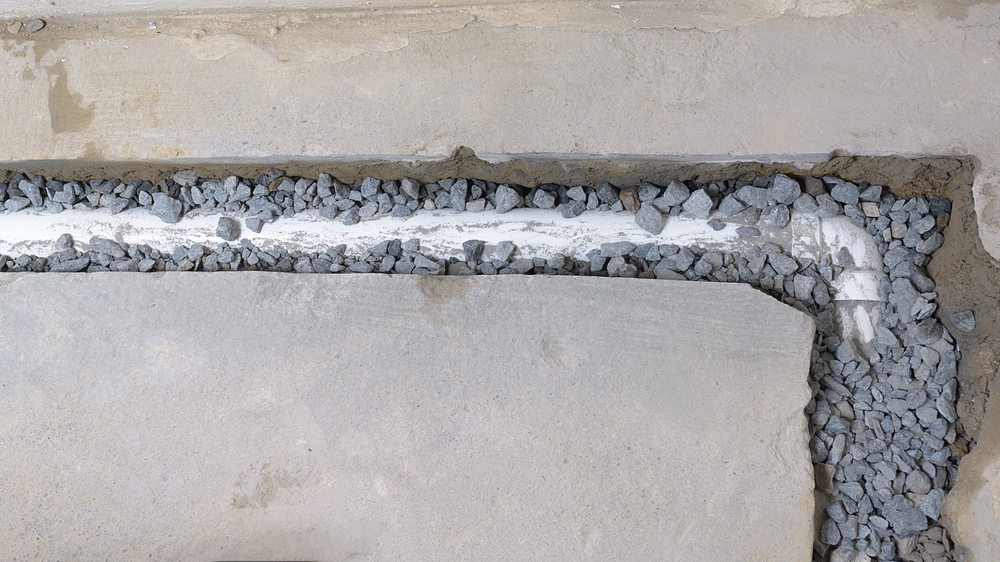 French drains are a last line of defense if you live in an area that’s prone to rain.

Unlike tile drains which sit at ground level on the exterior, French drains go inside the interior perimeter of the basement. Aside from the location, both drainage systems work similarly: a perforated pipe lets water flow down towards a collection pit, where a sump pump sends it to the surface. French drains also come with a similar layer of crushed gravel to prevent mud and dirt from clogging up the pipes.

If you’re using the basement for storage and not too stressed about aesthetics, you could opt to leave the drain uncovered. But should you plan to spruce up the space for everyday use, your best bet is to frame the walls on the inside. Although this will marginally decrease the available living space, you’ll cover up the unsightly drains.

French drains are, once again, much easier to install when constructing your home –they’ll only add a few thousand dollars onto the bill. But if you want them done on an existing home, you’ll need to drill through concrete and excavate a collection pit, a cost of ten grand or more. 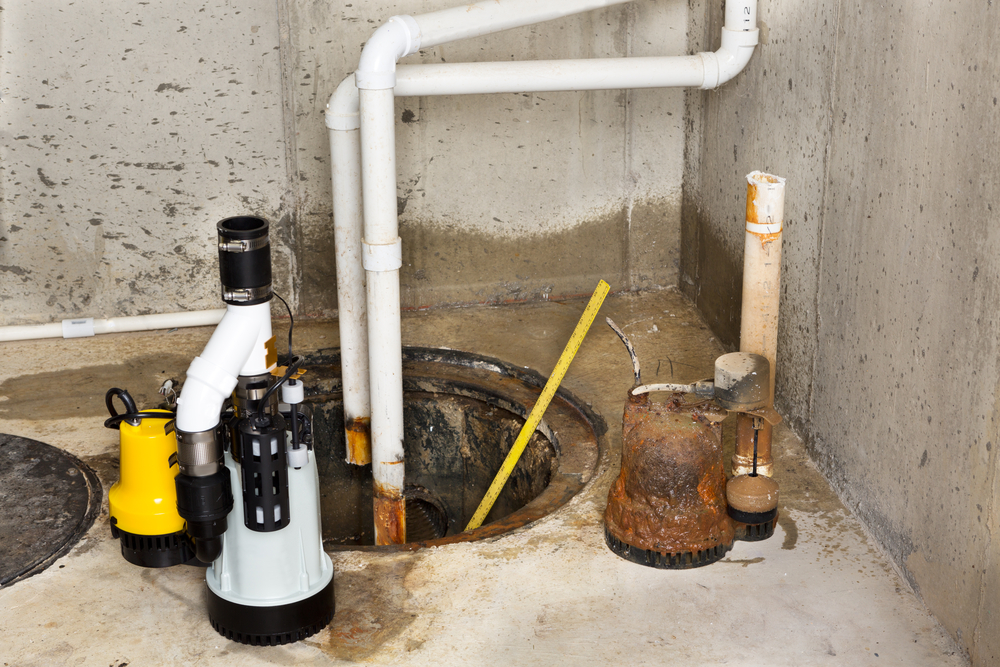 All three basement drainage systems require a sump pump in the collection pit to send water towards the municipal storm drain.

In the past, sump pumps discharged excess water directly into the sanitary sewer. However, this practice has largely been abandoned—and often outlawed—as it may overflow the municipal sewage system. Local governments frequently fine homeowners for non-compliance, many of whom were never aware they had an out-dated and illegal drainage system. If you’re worried about compliance, ask a plumber to verify where your sump pump sends the excess water.

Submersible sump pumps are the more powerful of the two and the top choice when basement flooding is a persistent threat. The system sits in the collection pit and automatically kicks in when the collected water reaches a pre-determined level.

Pedestal sump pumps are the cheaper option and offer sufficient pumping power when groundwater isn’t a major issue. These devices sit on a pole around six inches above the collection pit and come with a float that rises with the water level. When the water reaches a certain height, the float activates the pump.

Both options require a relatively complex installation, which would set you back a thousand dollars or so. All sump pumps must be connected to an outlet covered by a ground fault circuit interrupter switch to avoid potential electrocution.

We’ve covered the three main basement drain types in America to help you better understand how these systems work.

Whether you’re building a new home or looking to safeguard an existing flood-prone basement, it’s worth consulting a professional to determine what’s best for your home. Installing a basement drain is a massive investment, so you want to make sure you get it right the first time around.